Repeating the phrase like a mantra, the Swiss told Deputy Prime Minister Heng Swee Keat often this week when he toured their research institutes and companies: "Switzerland has only humans, rocks and snow."

It is this knowledge of its limitations that has spurred the small nation of 8.5 million people to constantly innovate, harness technology and aim for high quality in everything they do, an approach that has left a deep impression on Mr Heng.

"What I heard very often from chief executives was: 'We understand we are a high-cost location, and to be able to justify this high cost and higher salary, you need to create value in ways which allow you to stay competitive'," he said yesterday.

"So, there has been a relentless focus over the years on building up capabilities in technology, innovation, in the way they do their marketing and branding. It is not just one or two companies, but right across (all sectors)."

In March, the Economist Intelligence Unit ranked the Swiss cities of Zurich and Geneva among the world's top five expensive cities to live in. Singapore, Paris and Hong Kong tied for the No. 1 spot.

Mr Heng, who is also the Finance Minister, was speaking to Singapore journalists at the end of his five-day work trip to Switzerland to study its approach to such issues as productivity and industry development.

He was accompanied by officials from his ministry as well as the Trade and Industry Ministry, Economic Development Board, Enterprise Singapore and the National Research Foundation, which he chairs. 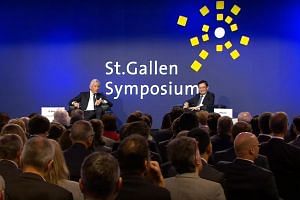 The DPM was also struck by how Swiss companies would collaborate to overcome common challenges.

ABILITY TO CONNECT WITH OTHERS

One reason the Swiss have been successful is their ability to stay neutral and yet connect with people from around the world.

DEPUTY PRIME MINISTER HENG SWEE KEAT, who was speaking to Singapore journalists at the end of his five-day work trip to Switzerland

"They compete fiercely with one another. But in areas where they have common interests (and) need the scale to solve these problems, they have been willing to come together."

And even as they transform their businesses, the companies place a great emphasis on workers' welfare, he said, adding that it is an important lesson that Singapore can learn.

The approach is reinforced by the country's education system, with its emphasis on vocational training and belief that companies play an important role in upgrading workers' skills.

"In many of the meetings I went to, I asked them how they do that," Mr Heng said. "Every company was able to articulate how they were training their workers... even as they automated, as they changed their business models."

While in Switzerland, Mr Heng also spoke at the 49th St Gallen Symposium on preparing citizens for future challenges, as well as Asia's growth and its implications.

The annual conference brings together young people, thought leaders and key decision-makers from around the world to typically discuss politics, economics and social issues.

He noted the event exposes young people to different cultures and he believes it is very important, "especially for young Singaporeans to build that cultural awareness across the world".

He said: "One reason the Swiss have been successful is their ability to stay neutral and yet connect with people from around the world."

Pointing to the range of people who came to St Gallen to share their views and thinking, he said such exchanges have brought vibrancy to many sectors and areas of Swiss life.

A version of this article appeared in the print edition of The Straits Times on May 11, 2019, with the headline 'Lessons from Swiss on how to harness tech and create value'. Subscribe
Topics:
More
Whatsapp Linkedin FB Messenger Telegram Reddit WeChat Pinterest Print Purchase Article Copy permalink