SINGAPORE - Fewer than 400 “tree incidents” were recorded this year, a sharp decline from the 3,000 cases in 2001, the National Parks Board (NParks) said on Thursday (Dec 5).

Most of the incidents were related to snapped branches and Nparks noted that the drop is despite the fact Singapore is encountering more severe weather.

It was responding to queries from The Straits Times’ on its tree management programme after at least three cases of trees falling in recent days.

On Nov 20, a tree shattered the rear windscreen of a white Subaru car in Scotts Road, causing a traffic jam in the Central Business District, while another tree toppled following heavy rain in Bedok North on Monday, landing on a black Mercedes-Benz.

In Old Upper Thomson Road on Wednesday, a jogger had a narrow escape when a tree fell.

NParks said on Thursday that it has a “rigorous regime” of inspections and pruning as well as post-storm checks, and that the system has been continuously refined since the early 2000s.

Checks have been intensified during periods of adverse weather conditions, such as in December.

Since November 2016, NParks said it has also carried out pre-emptive inspections on trees that are more than 4m in girth. Each tree is usually inspected at least once every one or two years, with certain trees and localities subjected to more checks. 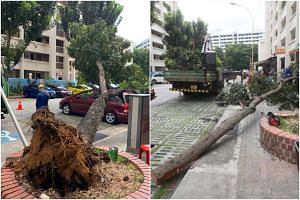 14 people taken to hospital after tree falls in Sembawang Park

The frequency of checks depends on a variety of factors such as the age and condition of trees and their proximity to human traffic or valuable property.

"Corrective measures where necessary are carried out immediately. We are adopting additional measures such as increased frequency of site inspections to spot and remove dead, dying or weakened branches in the tree crown," said Dr Teo, who is also the MP for Bukit Panjang.

Aljunied-Hougang Town Council, which is managed by the Workers' Party, did not respond to ST's questions on its tree management plan.

But he added that Singaporeans should take a broader view of the recent incidents.

“The aesthetic, social, environmental and economic benefits of our urban trees far outweigh the risks that are associated with their planting.”