SINGAPORE - Mr Lee Hsien Yang, the younger brother of Prime Minister Lee Hsien Loong, is making preparations to leave Singapore with his wife, but does not know yet when he will leave and where he will be going.

Speaking to The Straits Times on Wednesday (June 14), he said it was the only sensible option left for him.

"There are many ways people are made to feel uncomfortable," he added. "I'm a person who spent his life here, who's done public service, contributed in the private sector. This is my home. I wouldn't do this unless I really felt there is a serious issue. And I've felt this is not where I can continue to live, the way I've been living in the last two years."

Mr Lee Hsien Yang, chairman of the Civil Aviation Authority of Singapore, had issued a statement with his sister, Dr Lee Wei Ling, in the wee hours of Wednesday morning, saying they felt closely monitored and feared the use of state organs against them.

This situation made him feel compelled to leave Singapore "for the foreseeable future", they said in the six-page statement that centred on a dispute over the house of their late father, former prime minister Lee Kuan Yew, at 38 Oxley Road.

But he told The Straits Times that if PM Lee was no longer in power, he may change his mind. "If he's no longer in a position of power, I would reconsider my position," he said. 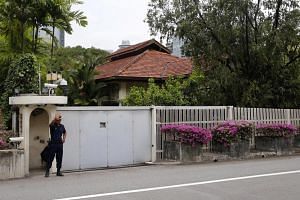 He declined to provide specific information on how state organs had been used against him.

When The Straits Times went to his home in the morning, he had already left for work.

His wife, Mrs Lee Suet Fern, who was on her way to the office, said they were making preparations to leave Singapore. She is a top corporate lawyer and managing partner of Morgan Lewis Stamford, the Singapore office of global law firm Morgan Lewis.

Mr Lee said he and his wife had not decided where they would go or when they would leave.

He also said his three adult sons, Shengwu, Huanwu and Shaowu, do not live with him anymore and would make their own decisions.

Mr Lee Hsien Yang and Dr Lee are joint executors and trustees of the estate of the late Mr Lee, and have pushed for their father's house in Oxley Road to be demolished, in keeping with their father's wish as stated in his will.

In Dec 2015, PM Lee had also said in a joint statement with his two siblings that he hoped the Government would allow the late Mr Lee's wish to be honoured, adding that he would recuse himself from government decisions on the house.

But in their Wednesday statement, both Mr Lee Hsien Yang and Dr Lee said they had lost confidence in PM Lee, and alleged that since the death of their father on March 23, 2015, there have been changes in Singapore that did not reflect what the late Mr Lee stood for.

The two siblings also said that preserving the house would allow their brother "and his family to inherit a tangible monument to Lee Kuan Yew's authority".

When asked why things came to a head now, he referred to the dispute over the house and said: "In Dec 2015 we thought we had an agreement and we thought that Hsien Loong had committed to recuse himself and to leave me with a free hand to deal with it. Clearly, his actions are inconsistent with that."

He cited as proof the setting up of a ministerial committee to consider options for thehouse.

He questioned why this was necessary, since the Government had said it would not be making a decision on the house as long as Dr Lee was residing there.

"Wei Ling is there today. She has no intention to move out. Why is this committee in existence?" he said.

He added that he and Dr Lee felt strongly about the house being demolished as they wanted to honour their late parents' wishes.

"Both my parents wanted it, we feel we owe a duty to honour our parents' wishes. My parents asked this of all three children and they told this to us many times in our lives. It is the least we could do for them, and actually I think many people would like to see that wish fulfiled," he said.

Shortly after the two siblings had published the statement on their Facebook pages at 2am, Mr Lee Hsien Yang's eldest son, Shengwu, also published it on his Facebook account.

Dr Li, a junior fellow at the Harvard Society of Fellows, said in an accompanying note:

"I generally avoid commenting on Singapore politics, but this is an exception. In the last few years, my immediate family has become increasingly worried about the lack of checks on abuse of power. The situation is now such that my parents have made plans to relocate to another country, a painful decision that they have not made lightly."

PM Lee had said in a statement on Wednesday that he was disappointed his siblings had chosen to issue a statement to publicise private family matters.

"While siblings may have differences, I believe that any such differences should stay in the family. Since my father's passing in March 2015, as the eldest son I have tried my best to resolve the issues among us within the family, out of respect for our parents," he said.