SINGAPORE - The lease for the Live Turtle & Tortoise Museum, which is due to be evicted from the Chinese Garden at the end of this month, will be extended, owner Connie Tan told The Straits Times on Saturday (March 17).

She said in a post on the museum's Facebook page that the National Parks Board had agreed to extend the lease.

"It was a very informal chat," Ms Tan told ST. "NParks is willing to extend the lease."

This comes after the Singapore Land Authority, Urban Redevelopment Authority, and the National Parks Board said in a joint statement on March 7 that NParks was "further studying the project timeline" to see if Ms Tan "can be given more time to firm up her plans".

The extension will give her more time to relocate the museum. She said that she will have to move out of the Chinese Garden site, where the museum has been for more than 16 years.

Details on how long the lease will be extended for and where the museum will move to have not been finalised yet.

Ms Tan, 47, had written a post on Prime Minister Lee Hsien Loong's Facebook page on March 4, appealing for help as she was at her wits' end.

PM Lee replied the next day, saying government agencies would be looking into the case.

Ms Tan told ST that since PM Lee's reply, she had received "an onslaught of offers of help".

Initially, she had planned on putting up the creatures in her events management office in Bukit Merah as a stopgap measure.

"Now that I have some choices to make (regarding where to move to), I am trying to very quickly tie things up with a new place instead of choosing my office," said Ms Tan.

"Because PM Lee replied me, there are people coming forward, but I need time to apply for and settle the permit and talk to them."

Ms Tan, who is the younger of two daughters, started the museum with her late father in 2001 to give children a chance to learn about different species of turtles and tortoises. She has given up her events management business to find a solution for the housing of the turtles.

Ms Tan said people have donated more than US$13,000 (S$17,000) towards her GoGetFunding fund-raising campaign.

She plans to use that money to build a new home for the animals at a new site, which she said she has not yet decided on.

"We have a rough layout. I want to build a pen, build something different. I'm meeting the contractors next week," said Ms Tan. 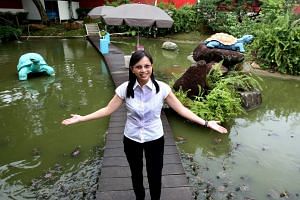 Turtle museum fights for survival: 6 other quirky museums to explore in Singapore

The entrance fees to the museum, which made it into the Guinness World Record books for the largest collection of tortoise and turtle items, have remained at $5 per adult since its inception.

Children aged six and below, as well as seniors above the age of 62, pay just $3 to enter.

This was why the museum, which houses about 500 tortoises, turtles and terrapins, sometimes got into the red, she said.

With the new move, she plans to revamp the museum and include an area where visitors can watch videos about the museum's history.

Currently, visitors can feed vegetables to the herbivorous turtles and tortoises. She plans to have live feeding of the carnivorous species - such as the alligator snappers - for visitors at the new site.

"Also, I've been wanting to do this - every Saturday, to get children to 'adopt' a turtle and do a turtle race just for the day or for the duration of the run," said Ms Tan.

She thanked those who donated towards her fund-raising campaign, and said while she has been criticised for the high goal of US$2 million, she said she just set a high target as she was unsure how much construction and moving into her new premises would cost.

She said she hopes to consolidate a break-down of the items that she will use the money for and put it up on the webpage by next week.

"I've been trying to answer as many people as possible," she said. "It's huge support that I'm getting from people and netizens, it's fantastic."