Lawyers for five Aljunied-Hougang town councillors, including three Workers' Party MPs, have argued that the maximum amount they can be sued for over alleged improper payments is slightly more than $620,000, not millions of dollars.

They made the argument in the High Court yesterday before Justice Kannan Ramesh, who is presiding over a $33.7 million lawsuit brought by the Aljunied-Hougang Town Council (AHTC) and Pasir-Ris Punggol Town Council (PRPTC) against the five over alleged improper payments and breaches of fiduciary duties.

Their closing arguments bring to an end the first leg of a trial that began last October, and saw written arguments traded back and forth in January and in March this year.

Yesterday, Senior Counsel Chelva Rajah argued that the much lower sum of $620,000 is because auditing firm KPMG, which looked through the town council's books, could detect only $1.5 million of improper payments. It concluded that only $624,621 was recoverable, while the rest was "undeterminable".

"This suggests that for these payments, KPMG could not ascertain whether AHTC had suffered any loss," he said.

On top of this, he noted that the bulk of this sum, or $608,911, was classified as improper by the auditors because the money was not project management fees as AHTC had said.

But the senior counsel pointed out that the former Aljunied Town Council, while under the People's Action Party before it lost Aljunied GRC in the 2011 General Election, had done the same. 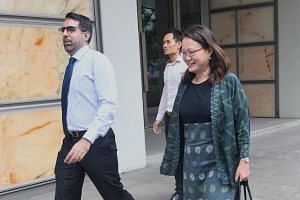 Excluding this sum would leave only $15,710 as recoverable, according to KPMG's report, he added.

In making his closing arguments, he also highlighted that an extra $2.8 million AHTC paid to a more expensive architect for seven out of 10 projects should not be taken into account. That is because KPMG could not determine which parts were recoverable, he said.

As well, it could be argued that the town councillors had picked the more expensive architect, LST Architects, "because they were the better architects and they had more trust and confidence (in them)", he added.

SC Rajah also argued that the town councillors had helped to save money by going with a new managing agent, FM Solutions and Services (FMSS), instead of the PAP's incumbent CPG Facilities Management.

He disagreed with AHTC and PRPTC's argument that FMSS cost more than if the town councillors had negotiated with CPG to stay.

This is because AHTC no longer had to foot the monthly $37,000 bill CPG paid to then-software firm Action Information Management for its computer system.

In the case of a second contract for two years, signed between AHTC and FMSS in 2012, this would have made FMSS $156,000 cheaper than if they had stayed with CPG, he said.

Among other things, he also emphasised that the WP town councillors and their hired vendors had consistently delivered on their services and as such, could not be said to have made improper payments.

"(Perhaps) the procedure was not followed - well, naughty boy, rap on the knuckles, but (there has been) no loss," he said.

He also argued that there should not be an order for further account and inquiry, given the two extensive audits the town council had gone through: one with KPMG and the other by auditing firm PricewaterhouseCoopers.

Mr Netto argued, among other things, that Ms How and Mr Loh could not be considered fiduciaries as they were contracting parties who took on appointments at the request of AHTC - and these were positions normally filled by employees.

"They were not remunerated. They had no discretionary powers... (They) cannot be said to have considerable autonomy over decision-making," he said.