An online Lasting Power of Attorney (LPA) system that is being planned by the authorities has been welcomed by those interviewed, for the convenience and efficiency it is likely to bring.

Individuals can appoint someone to make decisions on their behalf if they become mentally incapacitated, through a legal document known as the LPA.

Currently, LPA applications have to be submitted in hard copy. The Straits Times understands the new system allows for applications to be filed online.

Civil servant Darryl Lee, 28, feels that an online LPA system is more convenient and people also do not have to worry about misplacing their LPA documents.

He is thinking of getting an LPA done for the assurance that a trusted person will look after his assets and welfare if he loses his mental capacity. He said: "It's better to do these things (like an LPA) early as life can be unpredictable."

But executive director of Sheng Hong Welfare Services Sara Tan said some seniors may find it hard to use an online system. They include seniors who are not educated and those who are not IT-savvy.

Lawyer Kwok-Chern Yew Tee suggested that the Office of the Public Guardian allow LPA applications to be submitted online or in hard copy, depending on the mode applicants are comfortable with. The plan for an online system comes as more people have applied for an LPA. In the first eight months of the year, 16,279 individuals did so, a massive jump compared with 2,373 in 2013.

Besides greater awareness about the LPA, more people are signing up as the $75 application fee for Singaporeans has been waived until 2020. 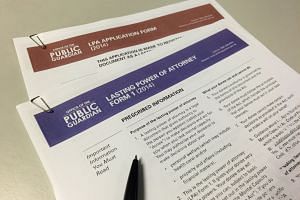 He cited the case of China tour guide Yang Yin who coaxed an elderly widow with about $40 million worth of assets into appointing him to act on her behalf.Yang was convicted in 2016 and later jailed for nine years for cheating the widow of $1.1 million. The LPA was also revoked.

Mr Ng said: "It made people realise that you could be manipulated by unscrupulous people out there.

"So it's best to make an LPA when you are mentally sound."