SINGAPORE - Employers are concerned that a new rule barring them from safekeeping their maid's money may result in domestic workers getting into financial strife.

The new rule takes effect from Jan 1, the Ministry of Manpower said on Sunday (Oct 07).

Employers found guilty of safekeeping a maid's cash, including her salary, can face a maximum penalty of a $10,000 fine and 12 months' jail.

The ministry said the new rule will protect maids and employers from money-related disputes.

It noted that it received about 600 complaints a year regarding maids' salary issues in the past three years.

A Straits Times straw poll of 25 employers of maids found that 14 did not safekeep money.

Most of those who did said the arrangement had been initiated by the maid or was a mutual agreement.

A housewife who only wanted to known as Mrs K. Ong, 44, said she has been safekeeping her maid's salary for the past five years she has been with the family.

"I'm not against this new rule, but the current arrangement is at my helper's request," said Mrs Ong, adding that her maid had concerns about having such a large sum of money in her own room.

Mrs Ong said she advised her maid to keep the money in a bank account but she said she felt more reassured knowing the funds were kept in the house.

She said: "My maid trusts me and I trust her, so that is what makes the arrangement work." 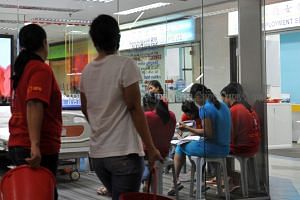 Dr C. Tan, 44, a general practitioner, said she safekeeps her maid's salary as she does not want the woman to lose it or spend unwisely.

Dr Tan added: "Perhaps MOM can make the employer and employee sign some agreement if the maid requests (for the employer) to safekeep (her salary). Like for, example, if the employer is willing to help to account for the monies."

Maids like Indonesian Ismonah Sunareri, 49, said she prefers that her employer safekeeps her salary: "It's more convenient and I won't have the tendency to anyhow spend the money."

Some employers raised concerns that if they did not safekeep salaries, some maids might turn to licensed moneylenders or loan sharks if they spent all their funds. They also warned that some maids would not save their money and return home empty-handed.

However, employers also acknowledged that the new rule did have its upsides.

Mrs Ong said: "It is less of a hassle for me if I do not safekeep her salary as I won't have to keep taking the money out when she asks for it. "

Maid agencies advocate that workers should manage their own funds.

Island Maids director Gabriel Ee said his agency advises employers to get a bank account for their maids and pay their salaries electronically.

"Safekeeping salaries used to be prevalent in the past, but younger employers are usually receptive to opening a bank account for their maids," he added.

Mr Ee said the new rule will help maids and employers avoid unnecessary salary disputes: "Now it's clear what employers can or can't do when it comes to maids' salaries."

He also pointed out that maids are adults who should ultimately be responsible for their own funds.

The new rule is good news for Humanitarian Organisation for Migration Economics (Home), which has engaged the Government on this issue over the years.

Ms Stephanie Chok, its manager of advocacy and communication, said maids will now have direct access to their money and salary.

However, Ms Chok said safeguards should be in place to protect maids who report their employers who continue to keep their salaries. "They should be assured they will not be punished or lose their job if they raise the issue."

She also addressed employer concerns that maids lacked the financial literacy to spend or save their money wisely. "If you think your domestic worker will benefit from a financial literacy course, then you should support her in doing so."

Ms Chok said employees in general do not expect their bosses to control how they spend or save their salary and urged employers to remember that "domestic workers are employees too".

She added: "Employers have their concerns and anxieties about domestic workers' behaviour, but we can't allow that to come at the expense of basic fundamental rights."

Are you in favour of employers not being allowed to safekeep their maids' salaries?