SINGAPORE - Though the estate of Chinatown is usually associated with history, heritage and the elderly, its key community institutions have been given a makeover to attract the younger crowd.

An upgraded Kreta Ayer Community Club (CC) and the Kreta Ayer People's Theatre were officially opened on Sunday (July 14), after a three-year long revamp of the CC and a 16-month renovation of the theatre.

It is the National Heritage Board's first community gallery to focus on the traditions and practices of local cultural art forms. These include Chinese opera, Nanyin music, Chinese puppetry, Chinese painting and calligraphy, and tea drinking and appreciation.

Apart from involving students in keeping Chinese culture and heritage alive, younger people who live or work in the area can enrol their children in the new childcare centre in the CC, or take part in programmes such as Kpop or trampoline fitness classes.

To reflect the changing needs of the community, there will also be photography, board games and windsurfing interest groups.

Ever since these programmes became available last year, vice chairman of Jalan Kukoh Residents Committee Lim Kay Yong, 28, said there has been a 30 per cent rise in youth participation numbers.

Currently, half of the residents in the Kreta Ayer-Kim Seng area are aged 50 and above. 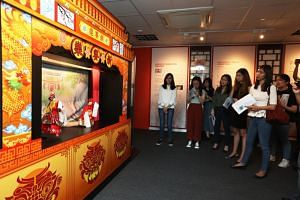 MP for Jalan Besar GRC Lily Neo said a balance needs to be stuck between meeting the evolving needs of residents and preserving the area's rich history and culture.

She said: "The upgraded Kreta Ayer CC will not only introduce new vibrant programmes that will reach out to an increasing number of professionals, managers, executives (PMEs) working in the area, but also continue to preserve Chinese arts and culture that this area is known for, together with the People's Theatre."

Visitors to the heritage gallery can also try their hand at the calligraphy station, puppet shows, tea ceremonies, and other activities.

The Social Service Office at Kreta Ayer and Family Services offered by social service agency Montfort Care have also shifted from their previous location at Sago Lane to Kreta Ayer CC so that residents can access these services at a key neighbourhood building.

The People's Association declined to reveal the cost of the upgrade.

Administrator Ong Kai Feng, 29, has been travelling from her home in Bukit Batok to Chinatown to play board games with other young people at the Kreta Ayer Community Club.

"I joined it after hearing about it from my former university friend," she said. "Coming here gives me the opportunity to explore new places like the wet market in Chinatown and I am impressed when I see the elderly having their own public spaces where they can hang out at and play chess."