Although Madam Tsang Sow Kuen is active, independent and in good shape for her age, the sprightly 80-year-old has already made her final wishes known to her children.

"They just need to follow my instructions. It's less complicated that way," said Madam Tsang.

Added her friend, 64-year-old Tan Lu See: "Our mothers never talked to us about these things. We had to learn it all ourselves. Now, we tell our children so that they will know what to do."

Both took part in a workshop on living and dying well organised by local charity Both Sides, Now, which uses art and drama to kick-start conversations on death and dying.

Yesterday, the Institute of Policy Studies (IPS) released a comprehensive report on the end-of-life care policy in Singapore, highlighting common issues and making recommendations for improvement.

These included tackling the problems of costs, family support and the ease of planning and communicating one's last wishes. 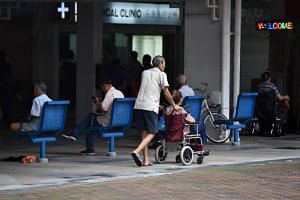 The fight for life or death: Other notable cases

At present, most of such funding goes towards conditions with a clear prognosis, such as cancer and organ failure, he said.

Frailty in this context refers to a condition in which seniors may experience symptoms such as significant unintended weight loss or have difficulty climbing stairs or walking.

"While Tsao Foundation is committed to providing quality end-of-life care to our home-bound frail seniors through our Hua Mei Mobile Clinic, the lack of a sufficient financial incentive may deter other aspiring service providers from starting, or sustaining, their home-based primary care, especially as part of vital long-term care until the very last breath," Dr Ng said.

Mr Timothy Liu, chief executive of the Dover Park Hospice, also highlighted the importance of starting the conversation on palliative care earlier - for example, when a person is first diagnosed with a terminal illness rather than when they are referred to a hospice for such care.

"It will be a bit late to start the conversation on palliative care when a patient is referred to us, as the patients are quite advanced in their illnesses," he said.

In the IPS report, researchers pointed out that families are often averse to bringing up the topic of death and dying for fear of upsetting their loved ones or for superstitious reasons.

That might have been the case for her mother's generation, but not for herself, Madam Tan said. "We are not so pantang (Malay for "superstitious) these days," she said.

Madam Tsang was matter-of-fact: "When it's time for you to go, it's time."