Prime Minister Lee Hsien Loong and US President Donald Trump have renewed a key defence pact which allows American forces to use Singapore's air and naval bases, extending it by another 15 years to 2035.

Both leaders lauded the close relationship between Singapore and the United States as they signed an amendment to the 1990 Memorandum of Understanding Regarding United States Use of Facilities in Singapore, a landmark agreement that underpinned America's security presence in the region for almost 30 years.

PM Lee said in brief remarks before the signing on Monday: "It reflects our very good cooperation in defence matters between the United States and Singapore, and also the broader cooperation we have in so many other fields - in security, in economics, in counter-terrorism, and in culture and education, as well."

He added at the InterContinental New York Barclay hotel, where the signing took place: "So, we are very happy with our relationship.

"We hope to grow it. And we hope that it will also be a means for the US to deepen its engagement in South-east Asia and in the Asia-Pacific region."

Mr Trump said that the US was "close friends" with Singapore, and that he and PM Lee had got to know each other very well.

"We have an extraordinary relationship with Singapore and with the Prime Minister," he added.

I accept it not just on behalf of myself, but of all those who have contributed to building a harmonious society in Singapore. May this award continue to inspire us all to pursue our unchanging ideal, of people living together in peace and harmony, regardless of race, language or religion, in every country in the world, and in the world as one together.

PM Lee is heading Singapore's delegation to the United Nations General Assembly, and spoke at the Climate Action Summit on Monday. He will also meet several foreign counterparts this week.

The 1990 MOU was signed by founding prime minister Lee Kuan Yew and then US Vice-President Dan Quayle. It was last renewed in 2005. The agreement facilitates US forces' access to Singapore's air and naval bases, and provides logistics support for its transiting personnel, aircraft and vessels.

Under it, the US has rotationally deployed fighter aircraft for exercises, refuelling and maintenance, as well as deployed littoral combat ships to Singapore since 2013 and P-8 Poseidon aircraft since 2015.

Singapore's Ministry of Defence said the renewal underscores the Republic's support for the US' presence in the region, which remains vital for regional peace, stability and prosperity.

PM Lee and Mr Trump also touched on Singapore's trade surplus with the US and the large amounts each country has invested in the other.

"In Singapore, you are our most important foreign investor, and in America, as small as we are, we have US$55 billion (S$75.7 billion) worth of investment," PM Lee said, adding that it generated a quarter of a million US jobs.

Mr Trump replied that was not bad. "We do tremendous trade with Singapore, and we appreciate it very much," he said. 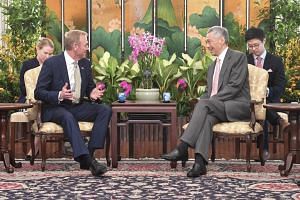 He also lauded the "tremendous success" of his meeting with North Korean leader Kim Jong Un in Singapore in June last year, thanking Singapore for hosting the summit and adding that the meeting was not given the credit it deserved.

PM Lee replied: "We are happy that it has helped to turn the situation in Korea around and point it in the right direction, and we wish you every success in continuing to make progress in this very difficult task."

Singapore's Foreign Ministry said that both sides reaffirmed the good progress of key bilateral defence initiatives, and welcomed Singapore's decision to acquire four F-35 Joint Strike Fighters, with an option for eight more in the future.

The leaders also affirmed their mutually beneficial economic ties, anchored by the US-Singapore Free Trade Agreement, and they discussed regional and global developments and other issues of mutual interest.

Separately, PM Lee and Crown Prince Alois of Liechtenstein discussed issues of mutual interest, including promoting countries' commitment to multilateralism, and supporting small state groupings such as the Forum of Small States and the Global Governance Group.

A version of this article appeared in the print edition of The Straits Times on September 25, 2019, with the headline 'Key pact on US use of air, naval bases in S'pore renewed till 2035'. Subscribe
Topics:
More
Whatsapp Linkedin FB Messenger Telegram Reddit WeChat Pinterest Print Purchase Article Copy permalink