Two other announcements, which do not require amendments to the law, were also made that will change how presidential elections will be run.

Since the introduction of the elected presidency in 1991, presidential elections have taken place in the second half of August, at the end of each president's six-year term. As a result, campaigning typically took place during the National Day period.

The presidential election this year will be held in September, to avoid having election campaigning during the National Day celebrations now and in the future. 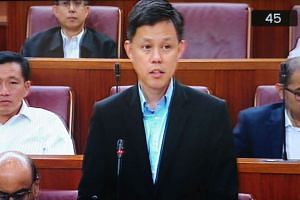 For the upcoming election, the Writ of Election will be issued in the later part of August, and polling day will take place in September. An acting president - the chairman of the Council of Presidential Advisors, or the Speaker of Parliament if the chairman is not available - will assume office until a new president takes office.

There will no longer be specific sites designated for candidates to hold their election rallies. Instead, those who want to hold a rally will have to secure their preferred sites and apply to the police for a permit.

The police will evaluate the applications and assess them based on public order considerations.

Candidates will get more television airtime to reach out to voters.

In the last election, candidates were given two 10-minute TV segments to make their statements. TV profiles of each candidate, featuring his personal and professional background, were also produced and broadcast.

In addition, candidates also participated in an hour-long TV forum.

Besides television airtime, candidates can also use social media or have indoor private meetings with specific groups of voters.

3. More time for everyone

Presidential hopefuls will get more time to submit their papers.

The deadline for applying for a certificate of eligibility will be extended to five days after the Writ of Election is issued, up from three days.

There will also be at least 10 days between the issue of the Writ and Nomination Day, up from five days.

This gives the Presidential Elections Committee more time to go through applications.

A Community Committee will be set up to assess which racial group candidates belong to for all presidential elections.

The 16-member committee will consist of a chairman and three five-member sub-committees for the Chinese, Malay, and Indian and other minority groups.

All who want to run for president must declare to the committee which of the three main communities they consider themselves a part of. They will be issued a certificate if the sub-committee is satisfied they belong to that community.

Overseas Singaporeans will get two extra days to register as an overseas voter. The deadline will be extended to two calendar days after the Writ of Election is issued, instead of up until the writ is issued.

There will also be automatic recounting of votes when the vote margin between the top candidate and any other candidate is 2 per cent or less of the total valid votes. This avoids unnecessary delays while waiting for candidates to request a recount.

The Returning Officer can also give more time for overseas votes to reach Singapore for counting.