SINGAPORE - The journey of Keppel Corporation over the past 50 years mirrors Singapore's own story of nation-building, Prime Minister Lee Hsien Loong said on Friday (Aug 3) at a dinner to mark the conglomerate's 50th anniversary.

Over the years, Keppel has turned adversity into opportunity, looked outward and broken new ground in external markets, businesses and technologies, he said.

In 1968, when Keppel was formed, Britain had announced it would withdraw its troops from Singapore earlier than expected and there was an urgent need to put the facilities the British would leave behind to economic use and keep thousands of redundant workers in their jobs.

In the early days, Mr Lee said Keppel and another company - alluding to Sembcorp Marine - were a critical piece of the Government's industrialisation plan and created well-paid jobs for many Singaporeans.

From a small local ship repair yard then, Keppel went on to become a world class player in ship repair and later a world leader in building offshore platforms.

"Keppel Corporation has evolved to become a diversified conglomerate," he said.

He said Keppel is also an example of a successful government-linked company that is run completely on a commercial basis.

While Keppel is a publicly listed company with Temasek as its largest shareholder, its operations and investments are not directed by the Government or Temasek, nor does either have a Board seat, Mr Lee said.

"The Keppel Board and management are fully responsible for running the company, and they are accountable to all the company's shareholders," he added. 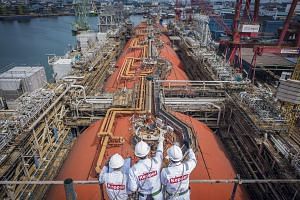 Keppel's journey in a book

Citing how Keppel has successfully ventured abroad with a significant presence in more than 20 countries and having more than half of its total revenues coming from overseas markets, Mr Lee said it is "absolutely necessary" for Keppel to expand overseas.

But it is "equally necessary" for the company to maintain high standards of integrity and performance, and keep its own operations and culture clean and transparent, Mr Lee said, even when operating in complicated environments where different norms prevail.

Mr Lee told guests and staff at the Shangri-La Hotel: "When things go awry from time to time, it is important that the company is resolute in putting things right, as Keppel has done in the recent case in Brazil."

Last December, Keppel Offshore & Marine (O&M) agreed to pay US$422 million (S$578 million) in fines, as part of a global resolution with criminal authorities in Singapore, Brazil and the US. This was in relation to corrupt payments made by a former agent in Brazil, between 2001 and 2014.

Mr Lee said other multi-national corporations face similar challenges when operating overseas, and it is essential to maintain the reputation of Keppel's, and Singapore's, which have been built up with enormous effort over many years.

In his speech, Keppel chairman Lee Boon Yang said the company closed a "painful chapter" with the global resolution with the criminal authorities.

Dr Lee said that the Board and management are determined to hold the company to the highest ethical standards.

"Keppel will do business legally and ethically, based on our superior solutions and strong execution," said Dr Lee added.

To mark its 50th anniversary, Keppel made a $10 million donation to the Institute of Technical Education, which will benefit financially-disadvantaged students.

Keppel's more than 20,000 staff will also each receive a $200 cash gift, in recognition of their hard work and dedication.

A commemorative book capturing Keppel's growth over the years, which was written by The Straits Times' business editor, Ms Lee Su Shyan, was also launched during the event.

A challenge Keppel has faced in recent years is getting young Singaporeans to work in the offshore and marine industry, Mr Lee added, and he urged the company to redouble its efforts here.

The 50th anniversary dinner was attended by more than 600 guests, including senior government officials, ambassadors, business partners and union representatives.