SINGAPORE - Food manufacturer Kellogg's has improved the packaging seals on its cereal bags, after a local customer found maggots, flies and even a spider web in three boxes of Special K cereal.

Ms Ifaa Insyiirah posted her first complaint on Facebook on July 22, showing pictures and videos of what looked like a live maggot in a bag of Special K Vanilla Almond cereal.

She said she had purchased two boxes of the cereal from different shops. One had live maggots in it, and the other had dead flies.

In a second Facebook post on July 25, Ms Ifaa shared a video showing another bag of Vanilla Almond cereal with moving insects and what appeared to be a cornflake dangling from a spider web inside. She had bought the cereal earlier that day.

In response to queries on Tuesday (July 31), the Agri-Food and Veterinary Authority (AVA) said it has received feedback on the issue. It said preliminary investigations found that the cause of "insect infestation" in Kellogg's Special K cereal was due to a weakened packaging seal, which may open when mishandled during distribution along the supply chain.

Kellogg's has since removed the affected batch from store shelves, an AVA spokesman added.

A Kellogg's spokesman said that a "small number" of cereal bag seals had been weakened, and that the company has taken corrective action.

"Our food now has new improved cereal bags... there are no affected products on shelf," she said.

The spokesman said that the company had received a small number of complaints and that appropriate action had been taken, but declined to provide details on how many boxes were affected, as well as when and where they were sold. 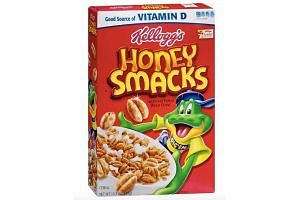 "We understand how this can be upsetting and we want to reassure everyone that at Kellogg's, our No. 1 priority is the quality of our foods," the spokesman said.

In June, Kellogg's issued a global recall of its Honey Smacks cereal due to the potential presence of salmonella bacteria.

Its other cereal brands include Frosties, Fruit Loops and Corn Flakes.