SINGAPORE - KCC Ventures (KCCV) has apologised for "being the cause of the misunderstanding" regarding the booking cancellation of the Singapore Democratic Party's (SDP) event on Saturday (Feb 23).

KCCV, which manages the SLV Hub events space in Eunos, said in a statement on Tuesday that it offered its sincere apologies to both JTC Corporation (JTC) and the SDP, and that "the fault lies solely with (KCCV)".

Last Saturday, SDP chairman Paul Tambyah said that it originally planned to hold the launch of its election campaign at the Eunos venue, but the political party was informed at noon on Friday that its booking had been cancelled, as political events were not allowed there, even though the nature of the event had been made clear from the start.

The SDP said on its website that a "JTC inspection" was one of the reasons cited for the cancellation of its original booking.

JTC said it had "no prior knowledge" of the event, and that it had informed the venue owner on Feb 8 of an inspection to take place on Feb 28, not Feb 23.

In its statement on Tuesday, KCCV explained that its staff and the SDP had negotiated the use of one of its spaces for SDP's event, and the use of the space had been agreed upon and paid for. KCCV had been aware of the intended purpose of the booking, which was for SDP's election campaign launch. 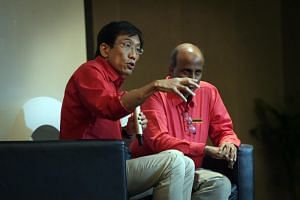 The booking was then cancelled because KCCV had not obtained prior approval from the building landlord and the KCCV board, which came to know of the booking only on Friday.

KCCV also said that it, through an e-mail from a company employee to the SDP, wrongly attributed the cancellation to a JTC inspection.

A KCCV spokesman told The Straits Times that its staff had not sought prior approval from the building landlord and the KCCV board in spite of the event being a politically-related one.

"The event was not in the regular course of KCCV's business, as typical events that are hosted at the venue would include video and audio recordings, panel interviews, music and vocal training, and post-production work, among others," he added.

He said that events not in line with KCCV's regular course of business "ought to be brought up to the building landlord and KCCV's board of directors".

The SLV Hub space is located at 115 Eunos Avenue 3, which is a multi-storey complex known as the Zhaolim Building. The building is owned by Zhaolim Pte Ltd.

According to the statement, the KCCV employee and manager have been counselled. Guidelines and controls have also been put in place to ensure that a similar situation does not happen again.

KCCV has contacted the SDP to apologise and will be refunding SDP's full payment. It added that it has offered to pay the difference between the rental that SDP had to pay at an alternative venue and the original rental cost for KCCV's premises, as well as the cancellation fee of SDP's caterer.

The company has also written to JTC to apologise.

SDP said on its website on Tuesday that it accepted KCCV's apology and considered the matter closed. The party also confirmed that KCCV compensated SDP for the expenses incurred as a result of the change in venue.