Born in 2011, Sunny was named as the park's icon in 2016 to represent the threatened hornbill species and raise awareness of the hornbill ivory trade.

Visitors to the 48-year-old park will be able to join in a special birthday celebration and catch a glimpse of Sunny the bird, alongside a Sunny mascot at the 11am High Flyers show on Saturday.

The bird's birthday falls during a period when the park is stepping up its efforts to protect the species, said park operator Wildlife Reserves Singapore (WRS) in a statement on Thursday (April 18).

WRS has also been working with the commission's hornbill specialist group, to further its conservation efforts for the threatened hornbill species across South-east Asia.

Jurong Bird Park also demonstrates a high standard of care for the hornbills in its charge, said WRS.

The park is home to the largest collection of South-east Asian hornbills in the world with 11 species. There are a total of 18 hornbill species in the park today, up from five when it opened in 1971. 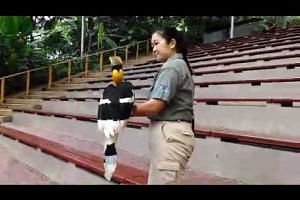 Hornbill gets new lease of life with prosthesis

In September 2018, a great hornbill which had cancer received a 3D-printed prosthetic casque, which was a world first in terms of specialist veterinary intervention, said WRS.

Dr Sonja Luz, director of conservation, research and veterinary services, said: "We need to rally behind these incredible birds.

"Through our animal icon Sunny the hornbill, who turns eight on Saturday, we hope to reach out to the public and raise awareness of the plight of hornbills in the wild and from there, hope to trigger conservation action," she said.

Visitors can learn more about the threats hornbills face through Sunny's daily appearances at the High Flyers show and can get up close with some of the park's hornbills and their keepers at the daily Hornbill Chit-Chat sessions.