SINGAPORE - While they are working hard and pushing themselves, junior lawyers should be aware of potential burnout, said Mr Foo Chee Hock, dean of the Singapore Judicial College.

Mr Foo, 58, one of four new Senior Counsels appointed on Monday (Jan 7), added that they should take stock of the situation from time to time, to reflect and decide if such a career is really what they want.

"I think the reality has to be seen," he said, explaining that the workload, learning curve and pressure on the job "is real".

He said that at the front end of their careers, junior lawyers will be investing a lot of time and energy in their careers, at the expense of other aspects of life.

While he acknowledged that this is to be expected, he said they should constantly pause and reflect. "If you are pushing yourself very hard, you need to question whether that lifestyle is sustainable. If you're working 14 to 18 hours a day, how long before you lose your edge?"

Ultimately, work should be something that brings meaning and fulfilment, he said. "You need to know you're doing the right thing and doing it right, that this is what you want for yourself."

On Monday, Mr Foo was appointed as an Honorary Senior Counsel on the opening day of the 2019 legal year, along with Ms Foo Tuat Yien, 65, former Judicial Commissioner on the Supreme Court Bench. 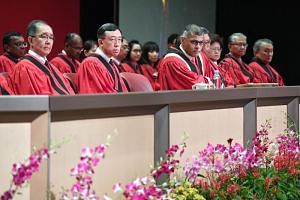 Courts and AGC finding ways to deal with growing workload, tapping IT and AI

Law an important tool for Singapore to manage relations with other states: Attorney-General

Honorary Senior Counsels are non-practising lawyers recognised for their special knowledge in law and contributions to the development of the law and legal profession, said Ms Serene Wee, chief executive of the Singapore Law Academy.

Started in 1997, the Senior Counsel scheme recognises the best and most skilful advocates in the legal profession.

The four additions bring the total number of Senior Counsels to 85.

Mr Siraj also weighed in with some advice for junior lawyers, emphasising that the role of lawyers is not to educate their clients on the law, but to use their knowledge of the law to help their clients.

"Put yourself in the shoes of the client. Imagine this was a problem you were facing. What would you expect from your lawyer? Then give your client that same degree of importance," he said.

For Mr Vijayendran, it is important for junior lawyers to keep believing in their dreams and never give up despite failures.

He added that it is very important to have mentors, and to learn the very best from them.

Correction note: An earlier version of this story said Honorary Senior Counsels are non-lawyers. They are actually non-practising lawyers. We are sorry for the error.