Some 25,000 people from all walks of life took a walk through the heart of Singapore at the SG50 Jubilee Big Walk early Sunday (Nov 29) morning.

The five-kilometre mass walk, organised by The New Paper and the People's Association, marked a high point of the nation's SG50 celebrations. (See correction note below)

It took in part of a permanent eight-kilometre commemorative trail, known as the Jubilee Walk, that connects more than 20 historic and iconic locations within the Civic District and Marina Bay precinct.

The event was flagged off by Prime Minister Lee Hsien Loong at the start point at the National Museum of Singapore.

Mr Lee, who also launched the permanent Jubilee Walk to commemorate the 50th anniversary of Singapore's independence on Sunday morning, took part in the walk, along with multi-generational families, young Singaporeans and individuals decked in superhero outfits. 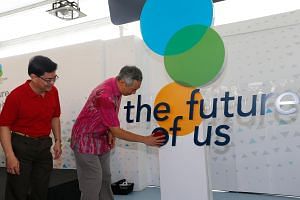 Work together to help build a future that is inclusive and united in diversity: PM Lee

The mass walk passed by key landmarks and sites that mark significant events in the nation's development, including the Padang and Parliament House, before ending at the Meadow at Gardens by the Bay.

Mr Lee, who took selfies with some participants, shook hands with others and exchanged high fives with young children, also launched the 220 m Jubilee Bridge that connects the Merlion Park and the waterfront promenade by the Esplanade. He then made a brief visit of the SG Heart Map Festival at the Marina Bay floating platform.

A number of roads, such as Old Parliament Lane, St. Andrew's Road, Connaught Drive, High Street, Fort Canning Link and Armenian Street, were closed on Sunday morning for the walk.

Performers, from ukelele groups to street dance groups, lined the route, entertaining the crowd with various acts such as covers of national songs.