SINGAPORE - Singapore's labour market took a hit from tightened Covid-19 restrictions in the second quarter of this year, as retrenchments rose slightly compared with the first quarter, and more people were placed on short work weeks or temporary layoffs.

There were about 2,340 layoffs in the second quarter, an uptick from the 2,270 in the first quarter, according to the labour market report released by the Ministry of Manpower (MOM) on Wednesday (Sept 15).

Despite this increase, the number of layoffs stayed within the pre-pandemic quarterly range in 2018 and 2019, said Permanent Secretary for Manpower Aubeck Kam at a briefing for reporters.

The report noted that retrenchments increased in manufacturing - mainly in electronics due to restructuring and reorganisation - and construction.

This was because more workers in these sectors were instead placed on short work-week or temporary layoffs.

Earlier this month, MOM announced that firms with at least 10 employees will have to notify the ministry each time they retrench any staff under new requirements that will kick in on Nov 1.

Currently, these employers need to notify MOM only when they retrench five or more employees within a six-month period.

The latest quarterly labour market report also noted that more employees, particularly those in food and beverage services (F&B), were placed on short work weeks or temporary layoffs in the second quarter.

The F&B sector was hit by stricter measures during the phase 2 (heightened alert) period from May 16 to June 13 when dining in was suspended to curb the spread of Covid-19.

A total of 5,580 employees were placed on such temporary work arrangements in the second quarter, an increase from the 4,020 from January to March.

"While the number remained elevated compared with pre-pandemic times, the prevalence of such temporary work arrangements helped to keep retrenchments relatively low in the first half of 2021," MOM said.

“They are not certain how the future will pan out with openings and suspensions happening unpredictably. Many of these workers shift to food delivery platforms and gig jobs to stay afloat.” 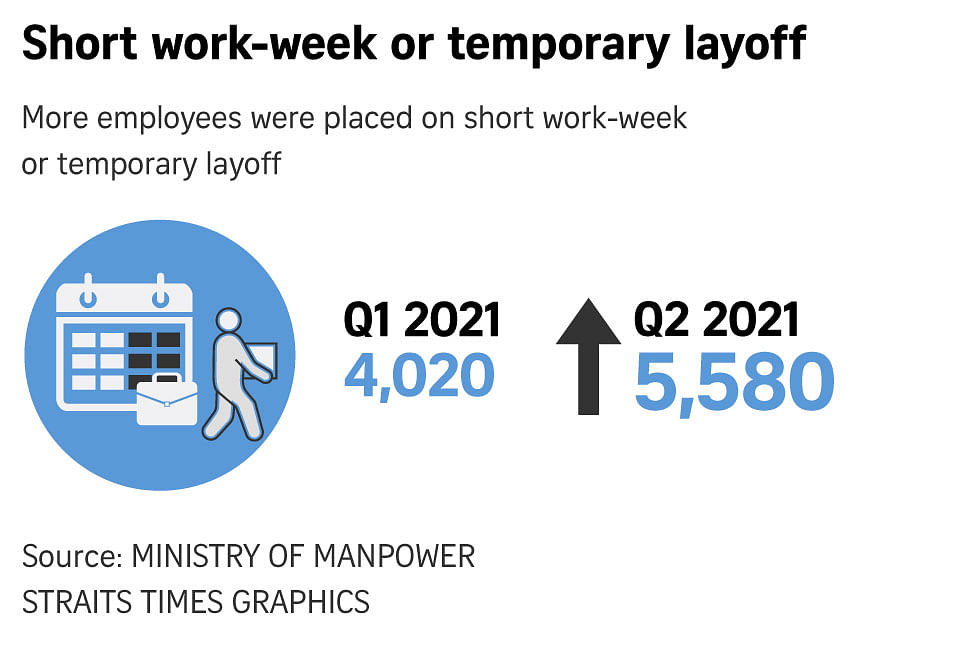 Overall, the seasonally adjusted unemployment rate stood at 2.7 per cent in June.

Mr Kam said that this is still considerable improvement since September 2020, when the unemployment rates peaked.

“However, the unemployment rate rose among residents in their 40s, and for residents with degree qualifications, though they remained below the peaks we saw from the same group in 2020,” he said. “We remain concerned for our mature workers, and they remain the focus of our job interventions.”

As for younger degree holders, Mr Kam said that in general, MOM does not observe greater difficulties among them in securing employment.

The resident long-term unemployment rate dipped to 0.9 per cent in June, seasonally adjusted, from the highs of 1.1 per cent recorded in December last year and March this year.

"Notwithstanding these improvements, the unemployment and long-term unemployment rates remain elevated," MOM said.

The six-month re-entry rate among retrenched residents dipped in the second quarter to 64 per cent from 66 per cent in the previous quarter.

Mr Kam concluded: “We are working hard to ease border restrictions and open up domestically as our vaccination rate continues to rise. This should raise employment levels and progressively reduce unemployment rates.

“However, we should continue to expect the labour market recovery to be uneven across sectors as uncertainties in the external economic environment remain. That said, the findings in the second quarter are still a cause for optimism.”

What happens if you are retrenched?