SINGAPORE – About 27,000 employers hired about 130,000 locals in the first three months after the launch of the Jobs Growth Incentive (JGI) last year.

Each employer hired a median of two locals from September to November, up from a median of one local hire in the same period in 2019, said Manpower Minister Josephine Teo in the 20th edition of her jobs situation report on Wednesday (March 31).

Nearly all, or 99 per cent, of the employers were small and medium-sized enterprises.

About six in 10 of them hired one to two local workers each. The remaining four in 10 hired more.

The $1 billion wage subsidy scheme was launched last August to spur the hiring of locals. Eligible employers receive up to 12 months of wage support of 25 per cent for each local hire.

Last month, the Government announced a seven-month extension of the scheme until September this year, with an additional $5.2 billion allocated.

The JGI was also enhanced from March 1 for employers who hire mature workers, people with disabilities and former offenders. They will receive up to 50 per cent in wage support per hire for up to 18 months.

The latest Ministry of Manpower figures showed that the scheme supported hiring across sectors.

Nearly four in 10 hires were in growth sectors such as wholesale trade, professional services, as well as information and communications.

One in five hires were in food services and retail sectors.

About half of all hires were not employed at the point of hire, and more than a quarter had been out of work for more than six months.

Six in 10 of all hires were previously employed in a different sector, and the same proportion earned the same or higher wages compared with their previous jobs.

Nearly half of the overall hires were mature workers aged 40 and above, while one-third were 50 and above.

Although more locals were hired over three months last year, the MOM statistics showed that more than 110,000 were employed by 26,000 firms from September to October, meaning that only 20,000 were hired in November.

Speaking during a visit to local company Pacific Logistics Group, Mrs Teo said this was to be expected, as many businesses were backfilling job positions that were lost due to the Covid-19 pandemic in the first two months of the JGI.

Matching job seekers to jobs based on their existing skills was also likely easier for employers, as there was a larger pool of job seekers in the initial months of the JGI, she added.

"In the months ahead, if there is sufficient hiring momentum, I think it will require more effort in terms of jobs and skills matching," said Mrs Teo.

150,000 S'pore employers to get $3b in Jobs Support Scheme payouts from end-March

Unemployment rates have been gradually declining since the last quarter of last year, from 4.8 per cent among Singaporeans and permanent residents last October to 4.3 per cent in January. Overall unemployment rate fell from 3.6 per cent to 3.2 per cent in the same period.

On Wednesday, Mrs Teo urged employers to be open-minded towards job seekers from diverse backgrounds.

Employers who hire seniors aged 60 and above can get additional support on top of the JGI, through the Senior Worker Early Adopter Grant and the Part-Time Re-employment Grant.

Those who need help to reskill new hires can tap Workforce Singapore's (WSG) career conversion programmes, which provide support of up to 90 per cent of wage and training costs.

Local job seekers who need help with their job search can also approach WSG and NTUC's Employment and Employability Institute. 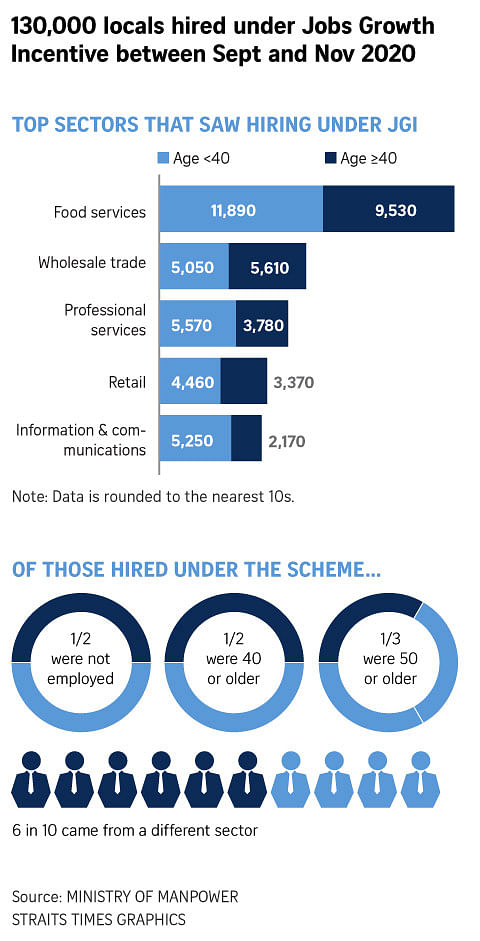