SINGAPORE - Singapore experienced its hottest day this year on April 2, clocking in at a steamy 35.6 deg C. The National Environmental Agency (NEA) predicted that the hot weather will last till the end of April.

The rising mercury got us wondering about that old proverbial saying: Is it really hot enough to fry an egg on the pavement?

So we put the urban myth to the test with an experiment: Put out two eggs, one on an asphalt surface and one on the hood of a car, in the middle of the day when the sun was at its height, then wait to see how long before the eggs cooked. 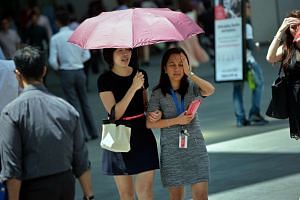 The two surfaces were chosen because they tend to heat up substantially under Singapore's tropical sun.

The eggs were cracked into little dishes jury-rigged from aluminium foil, which helped contain the eggs and conduct any surface heat.

The results, after two hours, were hardened yolks but still-liquid egg whites.

The ambient temperature climbed to a maximum of 45 deg C from 35.6 deg C during the experiment, which lasted from 1.15pm to 3.15pm.

The egg on the car hood warmed up to a high of 45 deg C while the egg on the asphalt reached 40 deg C, according to a food thermometer.

Eggs are proteins which coagulate, turning from liquid to solid, when they are heated up. Usually, egg yolks will coagulate at 70 deg C while whites coagulate at 80 deg C. The fact that the yolks "cooked" in the experiment even though the ambient temperatures did not reach such high temperatures is due to heat accumulation.

Dr Geeta Bansal, a lecturer at the School of Life Sciences and Chemical Technology at Ngee Ann Polytechnic, explained: "In this experiment, temperatures were not high enough to achieve coagulation and denaturation, but over time, the heat may have accumulated inside the egg components."

Specific heat is the amount of heat required to raise the temperature of 1kg of a substance by 1 deg C.

Eggs are usually fried in a few minutes, given a steady heat source like fire. But the liquid whites from the experiment proved that you need a focused heat source to properly cook the eggs.

Ms Petrina Lim, a course manager of Baking and Culinary Science, at the School of Applied Science at Temasek Polytechnic, said: "With a much lower temperature, some of the denaturation processes that require more heat energy would not occur, even over a much longer period."

So the conclusion from the experiment? A qualified urban myth: The pavement and a car hood can get hot enough to "cook" yolks but you'd be better off using a stove.