SINGAPORE (THE NEW PAPER) - For her school's final-year project, she decided to make a mundane everyday thing interesting and attractive.

So Miss Priyageetha Dia, 25, turned the staircase on the 20th storey of her Housing Board block in Jalan Rajah in Balestier from grey to gold.

She covered the grey staircase with gold foil and pictures of it started circulating online on Monday (March 6).

On Tuesday (March 7), the final-year fine arts student at Lasalle College of the Arts revealed on Facebook that she was the person behind it.

Speaking to The New Paper at the staircase, Miss Priyageetha admitted she was apprehensive over the possible consequences for what she did.

"I was uncertain of the regulations, but I wanted to be spontaneous," she said, adding that she had consulted her lecturers before going through with it.

Miss Priyageetha came up with the idea a month ago and executed it on Sunday (March 5), spending five hours using adhesive to cover the staircase in gold foil.

She said: "My practice involves dealing with space, and it prompted me to move away from my household and into public spaces.

"I used gold because my family has a history with goldsmiths, and I thought, why not use the material to invigorate the space?"

Miss Priyageetha insists her work is art and not vandalism.

She said: "Art needs to have a sense of liberation. Art needs to provoke and interrogate. Vandalism is something that doesn't respect another individual."

While the Jalan Besar Town Council recognises her "passion for the arts and desire to enhance her surrounding space", it said Miss Priyageetha had made an unauthorised act which is not permissible under the Town Council's (Common Property and Open Spaces) By-laws.

Criminal lawyer Rajan Supramaniam said: "Even if the gold foil is removable, she should have received approval from the town council first."

She said: "But I'm concerned about the safety of those who use the stairs. It may be slippery when it's wet." 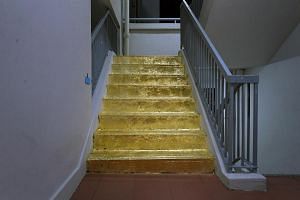 Gold stairs earn praise but are out of step with rules

With water pressure washing used to clean the staircase, she was concerned the gold foil may come off.

The town council postponed the monthly washing to next week.

"It would be nice if we can find another avenue for her to express her creativity - somewhere that's more permanent - and work with her," said Dr Neo.

Said Miss Priyageetha: "I'm quite excited if we can do that. It can be an activity involving residents as well."

Neighbours TNP spoke to did not consider the gold foil an obstruction.

One of them, Madam Sally Lee, 53, said: "It's aesthetically pleasing and it's something new."

Mr Quinn Lum, 24, an art, design and media student from Nanyang Technological University, visited the site over two days to document the work by capturing photos of people who visited the golden staircase.

He said: "This is a great opportunity for the art scene to prosper and it's quite phenomenal. I like how it provokes conversation and encourages artists to express themselves."

Miss Ho Si Hui, 21, a member of Band of Doodlers, a local group of artists, thought the concept was creative.

She said: "I don't necessarily define this act as art or vandalism. If it's to offend, it's vandalism. But art is when you show off anything that's beautiful."