In a Facebook post, Mr Goh said: "Tan Cheng Bock was my classmate in Raffles Institution. I have known him close for over 60 years. It saddens me to see how he has 'lost his way'.

"He is like Don Quixote tilting at windmills," Mr Goh added, using an expression from the Spanish novel by Miguel de Cervantes, which means to attack imaginary enemies.

At a press conference last month, Dr Tan criticised the People's Action Party (PAP) for an "erosion of transparency, independence and accountability".

During his party launch on Saturday, the former PAP MP said he decided to re-enter politics "for country, for people".

He also recounted how Singapore's founding prime minister Lee Kuan Yew had asked him to join the PAP before, and added that it was now his turn to ask Singaporeans to join him.

To this, Mr Goh wrote: "Ouch! (Dr Tan) omits to say that I put his name up to LKY. Surely I deserve some credit - or rather, blame - for who he has become now? 'For Country, For People'. He has conveniently left out 'For Me'!"

His latest post is arguably the harshest Mr Goh has been toward Dr Tan, who was one of three visitors apart from his immediate family allowed to visit Mr Goh when he underwent surgery for prostate cancer in 2014. 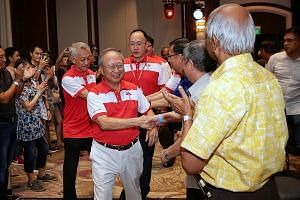 S'poreans have to decide who can serve them better, says Heng on Tan Cheng Bock's new party

In March 2016, Dr Tan announced his second bid for the presidency, while a Constitutional Commission was reviewing the process of the elected presidency.

At that time, Mr Goh told The Straits Times Dr Tan's decision was a "calculated political gambit" that could be seen as politicising the process.

But he had also said: "We are still very good friends, still go out with each other, but I will not try to influence him... I will just wish him good luck."

Dr Tan, who was the PAP MP for the former Ayer Rajah single-seat constituency for 26 years, is making a bid to re-enter politics at the next general election, which must be held by April 2021.

At his party launch, Dr Tan Cheng Bock said his party hopes to lower the voting age to 18, review the Comprehensive Economic Cooperation Agreement between Singapore and India, and bring up Singapore's low fertility rate, among other things.

He also urged Singaporeans to vote the party into Parliament and to deprive the PAP of its two-thirds majority.

On Sunday, when asked about Dr Tan and his party's priorities, Senior Minister Teo Chee Hean said: "The 2G have helped the 3G people like us to find our feet and to bring Singapore forward for the last 15 years. We should really be looking forward to the 4G... We shouldn't be going back to the 2G."

He was speaking at a National Day dinner held in Senior Minister of State Edwin Tong's Joo Chiat ward in Marine Parade.

Of Dr Tan, Mr Tong, a member of the PAP's 4G leadership, said: "We need to hunker down and focus on what is right.

"We continue to be close to Singaporeans, understand their issues so we can find the best way to serve them and that's really got to be our purpose."