SINGAPORE - The issuing of an order under the Internal Security Act (ISA) against a formerly accredited religious teacher shows the Government's readiness to act against anyone who threatens society, said Home Affairs and Law Minister K. Shanmugam.

All Singaporeans can promote their religion, as long as it does not promote violence or put down other races or faiths, he said.

"And the vast majority of our people as well as religious leaders understand that, which is why Singapore is an oasis of racial and religious harmony  when compared with many parts of the world."

Mr Shanmugam was speaking to reporters on Wednesday (Jan 16) after his ministry issued a statement that a former religious teacher and his student who held radical beliefs promoting violence and views detrimental to Singapore's cohesion have each been given a Restriction Order (RO) under the ISA.

The Ministry of Home Affairs (MHA) said 46-year-old Murad Mohd Said, a freelance religious teacher who was placed on an RO on Dec 5 last year, had been struck off from the Asatizah Recognition Scheme (ARS) in May last year for his segregationist ideologies that contravened the ARS Code of Ethics.

The ministry said Murad had taught that it was compulsory to kill apostates, who he defined broadly as those who did not believe in Islam, Sufis, Shi'ites and those who had renounced the religion. 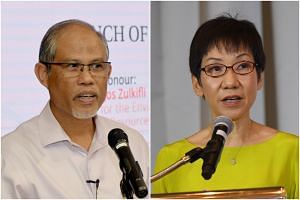 It added that he also taught his students that Muslims were allowed to defend themselves by waging "armed jihad" against "infidels who persecuted them" and he encouraged his students to withdraw from Singapore's secular society, disregard secular laws and adhere to the rulings of Syariah law instead".

Murad's student, 56-year-old technician Razali Abas, was arrested in September last year and placed on an RO in October to "prevent him from continuing his downward spiral into extremism".

He had been found to hold radical views concerning the use of armed violence against the perceived enemies of Islam, said the MHA.

Responding to a question about why Murad was not placed on an RO or a Detention Order when he was struck off the ARS, Mr Shanmugam explained that the Internal Security Department makes a "careful assessment of people" before taking action.

Often, he said, officers would try to engage those who might be veering off the accepted path, and advise them about the law.

"Only if all of that doesn't work and you continue - as in his case, to actually advocate violence and killing of others - and you become a threat to other people's lives, then we will act," he said.

The minister also commended the agencies for taking action by striking Murad off the ARS when they discovered his divisive views. The scheme is managed by the Islamic Religious Council of Singapore (Muis), the Asatizah Recognition Board and Singapore Islamic Scholars and Religious Teachers Association (Pergas).

"Based on whatever Muis had at the time, and I don't know what information they had, they thought that he could be accredited. But when they came to find that his teachings were not appropriate, they did revoke it," said Mr Shanmugam.

"And you know, actually, I think Muis ought to be commended because you have a system of certification; it works well, by and large. They have revoked the certifications of others as well, and when someone is going off and his teachings are inimical to society, Muis has taken action."