The collective sale frenzy that shook up the property sector last year with record-setting sums paid by land-hungry developers appears to be cooling, even as the spate of tender launches shows no sign of abating.

Goodluck Garden launched a tender with a reserve price of $550 million, following those of Eunos Mansion and Makeway View, and commercial property ICB Shopping Centre.

Owners may enter into a private treaty contract with a buyer within 10 weeks from the close of the public tender.

Six of the 11 projects are now in private treaty negotiations.

Sellers' unrealistic expectations, coupled with more state land coming on the market and the prospect of higher development charges, may be cooling the fever, analysts said.

JLL's national director of research and consultancy Ong Teck Hui believes some developers are "more measured in their bidding" as their landbanking needs may already be satisfied, and some new sites are too "optimistically priced".

This could lead to gaps in price expectations between sellers and buyers, he added.

The industry is also watching for policy moves in the Budget next month. This comes after several warnings last year about the risks of "excessive exuberance" and the Monetary Authority of Singapore reportedly taking a closer look at the way banks are financing development projects, after a slew of aggressive land deals last year.

Mixed-use developments also saw some tenders close without a sale, even as commercial property Katong Shopping Centre is in the midst of another attempt to sell en bloc, and Golden Mile Complex, Golden Wall Centre and Shenton House appointed marketing agents.

Jalan Besar Plaza failed in its third bid after its tender closed on Nov 10 last year, and private treaty talks ended without a sale. It may relaunch a tender in April, marketing agent Huttons Asia's head of investment sales Terence Lian said.

"Developers have to consider Jalan Besar Plaza's use since strata malls aren't doing well. But Huttons has received indications from the Urban Redevelopment Authority that serviced apartments can be allowed as part of redevelopment," he added.

"We believe there will be strong interest in a plum mixed-use Government Land Sales site in Holland Road that will likely be awarded tender in May or June. The expected bullish bids for this site could spill over to other mixed-use sites like ours."

So far this year, three residential collective sale sites have been sold for $1.04 billion. They comprise Park West in Clementi, Kismis View in Upper Bukit Timah and The Wilshire along Farrer Road.

She believes the collective sale fever is still strong. "CDL's New Futura's sales were encouraging, and will help boost developers' confidence in securing more sites over the next few quarters."

The District 9 freehold development has moved 24 units at an average selling price of $3,200 per square foot, according to agents. 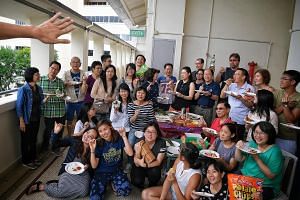 Chinese developer Qingjian Realty, which made headlines in May 2016 with its $638 million bid for Shunfu Ville, said it is "carefully assessing each site when they are available for bidding".

Ms Yen Chong, Qingjian's deputy general manager, noted that there has not been a significant change in the volume of residential units released in the first half of this year under the GLS programme, which may explain interest in collective sale sites.

Developers are also wrestling with issues unique to iconic developments such as Pearlbank, a horseshoe-shaped building near the Central Business District.

While it attracted interest, concerns linger over whether the "pre-application feasibility study on traffic impact will affect the number of units that can be built and the approach to pricing land, as well as apprehension if developers would be compelled to conserve it", Colliers managing director Tang Wei Leng said on Dec 19 after the tender closed.

Chef Bjorn Shen, 36, and his wife Roxanne Toh are weighing the pros and cons of supporting the collective sale of Braddell View, the largest of Singapore's 18 former HUDC estates.

Ms Toh, 34, said she will vote to sell the 918-unit development as "maintenance costs will likely get higher and our clubhouse is old. But we have also developed close ties here, and it is difficult to get a space this big with today's new apartments".

Tenders that closed without a sale