For instance, a first-time offender convicted of causing death by dangerous driving will face up to eight years in jail, three years more than the maximum provision under current laws, as well as a minimum disqualification period of 10 years.

Serious and repeat offenders also face the prospect of being suspended from driving immediately, said Mrs Josephine Teo, Second Minister for Home Affairs, during the debate in Parliament over the proposed changes to the law.

Tougher measures are needed as irresponsible driving remains a big concern and can have deadly consequences, said Mrs Teo, as she recounted a couple of recent cases.

"These are heart-wrenching tragedies that could have been avoided. Enforcement, education and road safety infrastructure must certainly continue to be improved. But we also need stronger deterrence against irresponsible driving," she added.

The current penalties are "manifestly inadequate", said the minister, citing how Britain and Hong Kong punish offenders who cause death by dangerous driving with a maximum jail term of 14 years and 10 years respectively.

A total of 12 MPs spoke in support of the amendments with many making suggestions on tackling irresponsible driving while a few voiced concerns over the proposed changes. 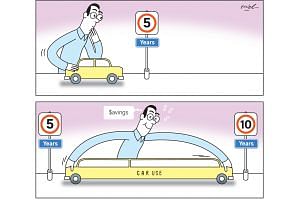 The true cost of driving in Singapore

For instance, there were calls to use technology to prevent repeat drink drivers from taking to the roads while Mr Murali Pillai (Bukit Batok) asked if a motorist might end up being punished twice for driving dangerously while being under the influence of alcohol or drugs.

Under the changes, irresponsible driving offences, which were previously dealt with under the Road Traffic Act (RTA) and the Penal Code, will now be consolidated under the RTA into two classes: dangerous and careless driving.

Three factors will decide whether an offence falls under dangerous driving. One, the manner in which a motorist operates his vehicle puts others at risk or unable to react, like when driving against the flow of traffic or swerving across lanes without warning.

Two, behaviour that can be considered dangerous is when a motorist drives a vehicle despite knowing he is not in any condition to drive safely, like using his mobile devices or failing to use his spectacles when he is short-sighted.

Three, failing to take extra precaution or slowing down when a motorist approaches a zebra crossing.

"When determining the punishment, we will look at the circumstances under which the offence is committed," said Mrs Teo. "The threshold for dangerous driving is higher than careless driving. So too the penalties."

With the enhanced law, the duration of the sentences will depend on the extent of harm caused, with death being the most severe, followed by grievous hurt, hurt and endangering life.

For instance, repeat offenders who drive dangerously causing death will face a maximum of 15 years in jail - compared with five years' jail for a second offence at present.

The most severe penalties are imposed on those driving under the influence (DUI) - one of the biggest contributors to serious accidents on Singapore roads, said Mrs Teo.

Such offenders convicted in cases involving death can face a maximum jail term of 10 years, including a minimum disqualification period of at least 12 years.

More details of the changes can be found on the Ministry of Home Affairs website.