SINGAPORE - The Infocomm Media Development Authority (IMDA) said that the cut fibre optic cable that caused internet connectivity in Jurong West to go down for nearly 30 hours is the first such incident of the year.

There were a total of 16 such incidents last year, with three cases occurring by March 2016.

A cut fibre optic cable in Jurong West had caused Internet and fixed voice services to go down in the area, leaving many people without connectivity. The outage started on Tuesday at about 4.30pm, due to a third-party contractor carrying out sheet piling works in the area.

The areas affected were Jurong West, Boon Lay and Corporation Road, and more than 3,500 users may have been affected, said fibre operator NetLink Trust.

The outage hit users of all three local telcos – M1, Singtel and StarHub – as well as Internet service providers (ISPs) MyRepublic and ViewQwest, all of which posted notifications on their Facebook pages informing users of the outage.

“IMDA is concerned with the service disruption, and has started its investigation to determine the cause of the incident. IMDA will take action against the relevant parties, including the earthwork contractor if it is found to have breached any of IMDA’s regulatory requirements when carrying out the excavating works,” said an IMDA spokesman.

Internet services in Jurong West were fully restored on Wednesday (April 12) night. Netlink Trust said in a statement that the fibre service interruption in Jurong West was fully resolved at 9pm.

“The fibre cables were progressively restored although progress was hampered by poor site conditions and heavy rain overnight,” said NetLink Trust. “NetLink Trust has worked closely with all relevant parties to ensure that service was restored to the affected area as soon as possible.”

In a statement at about 11am on Wednesday, NetLink Trust said: “Services are progressively being restored although progress has been hampered by poor site conditions and heavy rain.

“Most of the fibre cables damaged by the piling works contractor have been rectified. However, as more damaged cables were discovered this morning, a full service restoration is expected to be delayed till late afternoon today.”

It had said on Tuesday night that services would be restored by Wednesday morning.

Netizens took to the telcos’ and ISPs’ Facebook pages to complain about the Internet outage, with some asking for a waiver of data charges.

Netizen Dark Sky wrote on Singtel’s Facebook page at about 2.30pm on Wednesday: “It may not be Singtel’s fault, but consumers cannot be paying for things which they are unable to use. Singtel, please look into compensation (measures) for this... We consumers are not asking you to pay for the damages, but to ask you to do something about this. The company who damaged the cables – don’t they have to pay Singtel for the damages?”

Mr Lawrence Ng wrote on StarHub’s Facebook page at about 8.30am: “I am a resident in Jurong West, but my Wi-Fi is still not working as of now. I am a long-term customer and it’s very bothersome for me.” 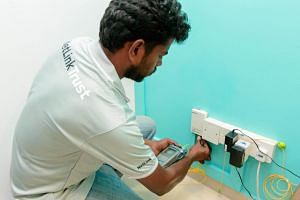 No Internet, phone calls for some in Jurong West area due to cut cable

In December 2016, there was also an islandwide outage of Singtel’s fibre broadband service for nearly 24 hours over a weekend. The outage left residential customers and some businesses unable to access the Internet.