Other ships in what is one of the world's busiest waterways kept their distance as officers from a range of agencies took to the ocean.

The scenario centred on a 128m-tanker that had just "collided" with another along the Sinki Fairway and "spilled" 500 tonnes of industrial chemical Xylene into the sea.

A containment boom - a floating barrier used to prevent chemicals or oil from spreading further - was then deployed around the affected tanker.

A chemical site team also approached the contaminated waters to test the atmosphere for toxic and flammable gases and vapours while a drone surveyed the area.

The exercise was organised by the Maritime and Port Authority of Singapore (MPA) to test the mobilisation and coordination of inter-agency resources in responding to a chemical spill in local waters.

It concluded when the authorities boarded the tanker and medically evacuated two crew members who had "inhaled" the chemical by lowering them in stretchers down the tanker's side.

Xylene is known to be toxic and flammable and can cause headaches, nausea and dizziness if inhaled.

The rest of the crew were evacuated and taken through the decontamination process.

Inter-agency exercise to clean up 'chemical spill' in Singapore waters

MPA chief executive Quah Ley Hoon said: "Today's exercise demonstrated our collective responsiveness and tested multi-agency cooperation in managing chemical pollution in one of the busiest waterways in the world."

The exercise involved 150 personnel from 20 agencies, including the MPA, SCDF, Singapore Police Coast Guard and the Republic of Singapore Navy. 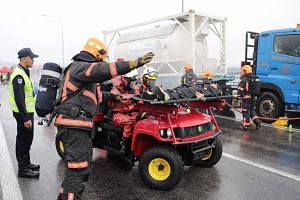 It was held in conjunction with the International Chemical and Oil Pollution Conference and Exhibition, which focused on marine pollution prevention and incident management strategies.

Conference delegates as well as international participants of the Maritime Public Leaders' Programme observed the exercise aboard a ferry near the Raffles Reserved Anchorage.

Captain Daknash Ganasen, senior director of the MPA's operations and marine services division, said: "Through this exercise, we are able to coordinate, manage and execute the plan and ensure that we are able to respond in the given time under stressful conditions."