Almost three months have passed since that historic victory at the Rio Olympics, but people still want a piece of the Schoolings.

"Everywhere we go, in the heartland, on the bus or in Orchard Road, people recognise us and ask us for pictures," said May, mother of swimmer Joseph, who became Singapore's first Olympic gold medallist when he won the 100m butterfly in August.

With their son back at the University of Texas at Austin where he studies and trains, the parents have had to get used to the limelight.

"The kids are usually the ones who recognise us first, and it's great that Joseph can bring some hope to them, and get them inspired to do what they want to do," said May, 60.

Children like nine-year-old Sashen Jeremiah Murali, who hours after watching Schooling's victorious race in Rio, pestered his mother to take him to the stadium near their Choa Chu Kang home for a run. 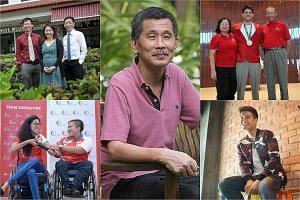 He now dreams of becoming a sprinter and breaking records. His mother, Nirmala Natasha Sathyamoorthi, 36, said: "He was so inspired, he wanted to run around the track and practise straight away. It opened my eyes to the possibility that Singaporeans can have many achievements in areas... such as media, film and art."

On Aug 13, Singaporeans had watched, transfixed for 50.39 seconds, as Schooling beat Michael Phelps, his childhood idol and the most decorated Olympian. "Somebody (His Name's Joseph Schooling) Finally Beats Michael Phelps," screamed a headline in The New York Times.

A picture of 13-year-old Schooling with Phelps, whom he met in Singapore in 2008, was shared more than a million times on Facebook. Swim schools reported a spike in interest from parents. The term "the Schooling effect" was coined to describe the inspirational quality of his win.

The journey to the top was a tale of toil, struggle and dedication - and Schooling's parents shouldered a burden both mental and financial as they staunchly backed their only son's dream of becoming an Olympic swimmer.

They had spent more than $1 million to pay for his education and training, with some of the sum partially funded through loans. They also lobbied for three years to get him a deferment from national service in 2013 to prepare for Rio.

Schooling is preparing for the National Collegiate Athletic Association Championships next March, and is focused on breaking the world record in the 100m butterfly.

A version of this article appeared in the print edition of The Straits Times on November 07, 2016, with the headline 'Inspiring Singaporeans to go for their dreams'. Subscribe
Topics:
More
Whatsapp Linkedin FB Messenger Telegram Reddit WeChat Pinterest Print Purchase Article Copy permalink