SINGAPORE - Inmates in prison will be assigned the same case officer - whenever possible - from the beginning of their sentence until they are fully integrated back into the community after their release, under new efforts undertaken by the Singapore Prison Service (SPS).

This is one of the aspects that prisons will be adopting to expand its community-based programmes, said Law and Home Affairs Minister K. Shanmugam on Friday (Jan 11).

Speaking before a tour of the new government-run Selarang Halfway House, Mr Shanmugam said that having the same officer walk the journey with the inmate from the start to the end of his journey of rehabilitation would "strengthen throughcare" and help with reintegration of the former offenders.

“We want better end-to-end oversight of the inmate’s journey through prisons,” he said.

Other strategies that the prisons is looking into include the use of psychology-based correctional programmes and the use of data to assess the risks and needs of each offender. This will also include having counselling sessions through video-conferencing.

It is also looking into addressing the negative impact that crime and jail time have on inmates' relationships with their family by teaching them skills to communicate with their loved ones, said Mr Shanmugam at the halfway house located in Upper Changi Road North.

The Selarang Halfway House, which started operating at the new site last November, is part of the larger Selarang Park Complex that will eventually include a Drug Rehabilitation Centre (DRC), a Work Release Centre, and a Community Supervision Centre. 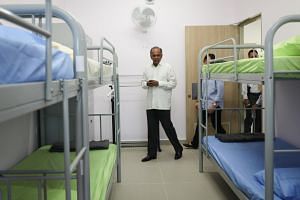 The integrated development is set to be ready in 2020.

The halfway house will boost efforts to help former inmates rehabilitate and reintegrate in society, in an conducive and secure environment, said Mr Shanmugam.

The facility currently houses 138 former offenders but can accommodate over 570 residents, making it the biggest halfway house in Singapore.

It is the only halfway house that caters to those who are undergoing the Mandatory Aftercare Scheme - a regime for former inmates who might have a higher risk of reoffending.

It is also the only government-run halfway house in Singapore and the only one that caters to both men and women.

It will add to the eight halfway houses working with the SPS which can house about 450 residents in total. Only one of the eight caters to women.

"By providing a conducive and rehabilitative environment, the Selarang Halfway House, in close partnership with the SPS, works with residents to address their reintegration needs and facilitate their journey to stay crime-free," he added.

"Through these efforts, we hope to help residents break away from their cycle of reoffending."

Mr Shanmugam also touched on the proposed changes to the Misuse of Drugs Act, which will be tabled for the second time in Parliament later this month.

The changes seek to strengthen the rehabilitation regime for drug abusers and help them break the cycle of addiction.

If passed, repeat drug abusers - who do not commit other kinds of crimes - will be directed to the DRCs for intensive rehabilitation, instead of long-term imprisonment.

“We have studied the evidence very carefully, and we think that we can do more on the rehabilitation side and maybe re-look at whether we really need long-term imprisonment for these 'pure' drug abusers,” said Mr Shanmugam, referring to “pure” abusers as those who do not have other criminal charges.

Currently, abusers arrested for the third time or more for drug consumption are given long-term imprisonment sentences, but the proposed changes could mean shorter sentences and earlier integration into society.

This calibrated approach will target the attitudes behind drug addiction, which is a complex situation, added Mr Shanmugam.

He said the changes would provide for longer supervision periods post-release, from the current maximum of two years to five.

“As most of you know, two years or one year is okay, but by the time they reach the fifth year, their relapse rate is nearly one in two.

“So I think supervision for a longer period - five years- will hopefully help us help them,” said Mr Shanmugam.