At the World Economic Forum's annual meetings this week, Singapore launched a guide for companies that adopt artificial intelligence (AI) to do so in a responsible and ethical manner.

It also inked a deal with the world's largest business organisation, the International Chamber of Commerce, and 17 major companies to drive global digitalisation in trade and commerce through the TradeTrust platform.

And, back home, the Republic was joined by Chile and New Zealand in marking the substantial conclusion of a digital economy agreement between the three countries.

Communications and Information Minister S. Iswaran sees these developments as part of an effort to build trust in these technologies among users - businesses and people alike. "Without the trust, it is very hard for the technology to be fully utilised," he said in an interview on Thursday.

Cross-border trade, for instance, is an area where Mr Iswaran noted trust has long been ensured through documentation. It remains largely paper-based.

TradeTrust seeks to digitalise procedures and set common standards to speed up trade and processing times.

Said Mr Iswaran: "If it's a trusted digital platform, then the efficiency gains are significant and, more importantly, it will now create new opportunities for trading and for cross-border economic activities."

Singapore being an early adopter of AI and digitalisation helps, the minister added.

"Because we are an early adopter, we're also actively thinking about the implications of these technologies for our businesses, for our jobs and our people, and how we need to adapt as an economy and as a society," he said.

Microsoft president Brad Smith made a similar observation earlier in the week. 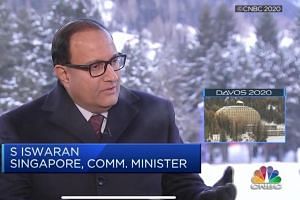 He told a panel at the forum that the AI guides launched this week - the second edition of the Model AI Governance Framework, as well as a guide for organisations on governance practices and case studies on how groups from different sectors have adopted these - were a demonstration of the kind of steps "helping make Singapore a leader, not just for technology but for trust".

"This is the kind of effort that is not only going to serve Singapore, but the world," Mr Smith said.

"The more governments and countries share with one another and learn from one another, the better the opportunities for them to benefit and move together," he added.

Two broad principles in these guides are that decisions made by AI should be explainable, transparent and fair; and that AI systems, robots and decisions should be human-centric.

Mr Iswaran also said many countries and companies he met are looking to partner Singapore on these initiatives. "They recognise the role that Singapore has played, and the contributions that we can make. That is credit to our system and our people, that we have been able to demonstrate how we are using technology and adapting to it, and trying to enhance its value proposition," he said.

Singapore is also making progress in the digital space in an innovative way that opens up possibilities for cooperation with like-minded partners, the minister added, citing the digital economy agreement whose substantial conclusion was announced on Tuesday.

Mr Iswaran said that taken together, these initiatives "underscore Singapore's competitiveness and value proposition as a place to do business, as a place that thrives with innovation, and as a place where you can explore new ideas and make them real possibilities".

"We have always been an economy that is thriving on connectivity, innovation and talent," he said. "At this juncture in our evolution, the digital economy presents a significant new set of opportunities, if we are able to harness the innovations that go with it."