SINGAPORE - "The food was good."

Mr Rajakumar Gunasekaran, operations director of Indian vegetarian restaurant Komala Vilas, takes pleasure in even the simplest of praises from his customers, but this was no ordinary compliment.

It was made by visiting Indian Prime Minister Narendra Modi, who caused quite a stir when he dropped in at the no-frills Serangoon Road restaurant with Prime Minister Lee Hsien Loong and his wife Ho Ching on Monday (Nov 23) night.

"In all that excitement, it was all I could remember from my brief conversation with him. But the best thing was that he enjoyed the food," Mr Rajakumar, 29, told The Straits Times on Tuesday of his meeting with Mr Modi.

Mr Rajakumar's grandfather opened Komala Vilas - which has become something of an institution for vegetarian food on the Little India culinary scene with three outlets and a sweet shop - in 1947.

The restaurant was told in advance about the visit.

The VIPs arrived at about 9.15pm, after Mr Modi's Singapore Lecture at the Shangri-la Hotel, and stayed for 45 minutes.

Excited staff served them a vegetarian spread of idli (a rice cake consisting of fermented black lentils), vadai (savoury fritters) and the restaurant's famous thosai (a crepe made from rice batter and lentils).

"Their initial order was only for plain thosai, but Ms Ho later ordered onion and masala thosai for Mr Modi and Mr Lee to try," said Mr Rajakumar.

The VIPs' appearance was a major surprise for the customers.

Business went on as usual on the restaurant's second floor, but the first floor was occupied only by Mr Modi, Mr Lee and Ms Ho during the meal due to security concerns.

A crowd of gawking onlookers gathered outside the restaurant as word spread of Mr Modi's presence, said cashier Kavitha, 27.

She added that Mr Modi took a photo with all the staff after his meal.

Mr Modi and Mr Lee both posted wefies taken at the restaurant on their Facebook pages not long after dinner.

Describing Mr Modi as a humble man and good customer, Mr Rajakumar said: "He is also now probably the most famous person to dine at our restaurant, besides the Tamil stars who have tried our food. We are very proud." 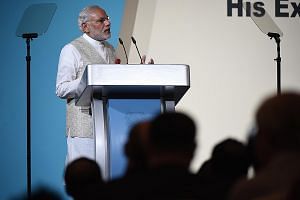 Mr Modi is in Singapore for a two-day visit to mark 50 years of diplomatic ties between the two countries.

On Monday, he delivered the 37th Singapore Lecture where he paid tribute to Singapore and its leaders, and outlined his country's Act East Policy.

He will wrap up his visit on Tuesday by calling on President Tony Tan Keng Yam, signing a joint declaration with Mr Lee to elevate the ties between the countries to a strategic partnership, and launching a commemorative Singapore-India stamp set.