In their 72 years of marriage, Mr Phua Gee Moh and Madam Han Fong Tin endured hardship and being apart from each other.

In a Facebook post on Valentine's Day, Assisi Hospice shared their story, which embodies the spirit of love in sickness and in health.

The couple got married in 1947 in China's Hainan province - he was 21 and she was 20 - but lived apart for more than 10 years after their wedding.

This was because Mr Phua came to Singapore to work to support the family, while Madam Han stayed in Hainan to take care of his elderly mother and their child.

When his financial situation improved, Mr Phua arranged for his family to join him in Singapore. However, the couple were still often apart as he was a sailor and would be out at sea regularly.

This did not stop Mr Phua from expressing his love for his wife: He would cook Hainanese chicken rice for her whenever he was back home.

Three years ago, Madam Han, now 92, was diagnosed with dementia. Eventually, she was able to recognise only her husband.

She would pour water for him and help him with his meals. When he was running a fever, she would sit by his side on his bed, replacing the cool towel placed on his head to lower his temperature.

AN ASSISI HOSPICE SPOKESMAN, on how their roles reversed when Mr Phua's condition worsened and he was bedridden. Madam Han became more involved in taking care of him.

Despite his own advanced years, Mr Phua took over the household chores and became her sole caregiver.

The chicken rice that he often cooked for her when they were younger became one of the few memories she held on to as her dementia worsened.

However, in December last year, the couple received more bad news: Mr Phua was stricken with leukaemia. His conditioned worsened quickly and he was admitted to Assisi Hospice on Jan 9.

But the couple were able to spend Mr Phua's final days together. The hospice's palliative care team arranged for her to be admitted to the hospice and converted a double room for them, allowing Mr Phua to continue caring for his wife.

When he was first admitted to the hospice, Mr Phua could still walk.

He and Madam Han would walk to the dining hall together and share their meals, spending a lot of time talking to each other, a spokesman for Assisi Hospice told The Sunday Times.

Mr Phua knew his wife's preferences, and made sure that the nurses were aware of her needs as well, reminding them to provide softer food for her and to ensure that she had her black handbag with her as it offers her a sense of security. 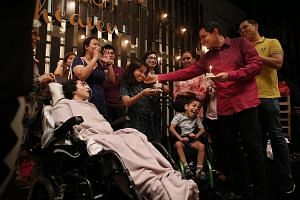 Love, in sickness and in health: Businessman stays by semi-comatose wife

Modern Love: What love is to readers

When Mr Phua's condition worsened and he was bedridden, the couple reversed roles as Madam Han became more involved in taking care of him.

"She would pour water for him and help him with his meals. When he was running a fever, she would sit by his side on his bed, replacing the cool towel placed on his head to lower his temperature," the hospice spokesman said.

On Jan 22, Mr Phua died peacefully in the hospice at age 93, with Madam Han at his bedside.

His wife was his greatest concern, and before he died, he made sure that she would be well taken care of.

The couple's only son and daughter-in-law, who are in their 70s, suffer from chronic illnesses.

The hospice has arranged for Madam Han to be cared for in a nursing home, the spokesman said.

A version of this article appeared in the print edition of The Sunday Times on February 17, 2019, with the headline 'In sickness and in health: The love story of a couple married for 72 years'. Subscribe
Topics:
More
Whatsapp Linkedin FB Messenger Telegram Reddit WeChat Pinterest Print Purchase Article Copy permalink