The community will be roped in to fight terrorism by sending vital information to the police during an emergency.

The new i-Witness function within the Police@SG mobile app will let the public alert the police to an attack by sending text, pictures and videos.

Launched yesterday, it forms the next phase of the Singapore Police Force's (SPF) crowdsourcing efforts by tapping in-built cameras in mobile devices.

"If we can reach out effectively, it will provide SPF with millions of sensors, millions of pairs of eyes, which will help us protect our people better in our communities," said Home Affairs and Law Minister K. Shanmugam.

Besides major incidents, the public can also report crime and traffic matters using the app.

A new SMS service will also be rolled out on Sunday. It allows the public to send necessary information to the police when it is unsafe to call 999. For instance, in hostage situations where speaking would reveal a person's position, the person can instead SMS vital information to 71999. 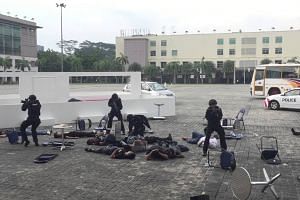 Fast-response police unit to counter terror rolls out in June

Public education efforts will also be stepped up to better prepare the community in the event of a terror attack.

They include raising awareness in the coming months of "Run, Hide, Tell", as part of the SG Secure movement.

Rather than confront armed assailants, the public will be advised to run away from danger, hide from the attackers and inform the authorities immediately about the threat through various channels, such as i-Witness.

Police national service officers will be trained to be SG Secure mobilisers under a new community-engagement vocation.

These officers will support the Community Policing Units at the neighbourhood police centres and form the key link to the ground by communicating counter-terrorism messages in schools and at community events.

A version of this article appeared in the print edition of The Straits Times on April 30, 2016, with the headline 'In an emergency, alert police via i-Witness'. Subscribe
Topics:
More
Whatsapp Linkedin FB Messenger Telegram Reddit WeChat Pinterest Print Purchase Article Copy permalink