Smart estates refer to estates that leverage smart technologies to collect and analyse data to optimise maintenance cycles as well as pre-empt problems. The aim of this is to enrich the lives of the community through the use of technology.

For example, this could mean tapping data to predict the next lift breakdown, or making use of more efficient energy resources through on-demand lighting and cooling systems in buildings.

IMDA and Austrade signed a memorandum of understanding on Tuesday (June 4), which will focus on three key areas for smart estates.

These include facilitating networking opportunities for Singaporean and Australian smart estates players, driving technology projects for the two countries, as well as co-developing a smart estates guide for the industry.

The MOU signing, which took place at the Regional Built Environment Forum at Sofitel Singapore City Centre, was witnessed by Senior Minister of State for Communications and Information Sim Ann and Australia's High Commissioner to Singapore Bruce Gosper.

In a statement, Mr Tan Kiat How, IMDA chief executive officer, said: "As we continue to develop a vibrant smart estates ecosystem in a digital economy, there is a strong need to foster greater collaboration with key players within the built environment cluster. 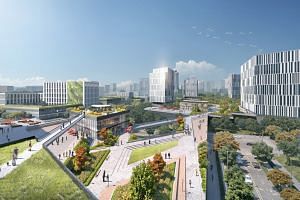 Smart-city solutions for Asia need not be grandiose projects

"We believe that companies from both Singapore and Australia can complement each other, leverage on each other's strengths and co-develop smart urban solutions for Singapore, Australia and South-east Asia."

During a panel discussion that followed the MOU signing, Mr Adam Beck, executive director of Smart Cities Council Australia New Zealand, pointed out how some people are wary that going smart is "all about technology and that it's not human-centred, and not about people".

But he believes that the truth is the opposite.

"The benefits of big data and social media, which is a tap that never turns off, is that through some really good algorithms and analytics, we can get a really solid temperature test on what the community is really thinking and feeling. I think when we do that more and more, and direct our smart cities action and investment around enhancing our well-being, then we're really starting to win in terms of smart cities being human-centred," said Mr Beck.

She said: "Knowing where your vulnerable populations are, and knowing where your weak points are as a city through mapping and the data that you have in terms of who lives where - in particular the ageing population and young people - it helps tremendously with disaster response."

For example, she said that a Houston-based start-up named One Concern has digitised its emergency management response using maps of the city, and can tell emergency services where they need to be first for every disaster situation, such as a flood.