SINGAPORE - The Islamic religious leader who was fined $4,000 for making offensive remarks against Christians and Jews will be asked to leave Singapore.

On Monday (April 3), Imam Nalla Mohamed Abdul Jameel pleaded guilty to promoting enmity between different groups on the grounds of religion, and committing an act prejudicial to the maintenance of harmony.

“Nalla has paid the fine. He will be repatriated,” said the Ministry of Home Affairs in a statement on Monday.

The imam, who is from India, has been working in Singapore since 2010 on a work permit.

“The action against Nalla has been taken with some regret,” the MHA said. “Nalla has worked diligently as Chief Imam at the Jamae Chulia Mosque over the past seven years, attending to the needs of his congregation, and reaching out to other faiths. He has not been deliberately malicious.” 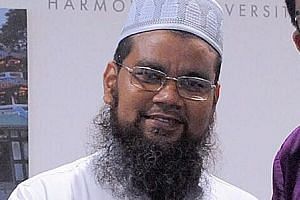 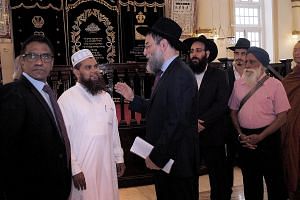 In February, a video of the imam reciting a prayer in Arabic that said “God help us against Jews and Christians”, among other things, was circulated online.

Last Friday, the imam apologised for his remarks. He clarified that the additional supplication he read was not from the Quran, but an old Arabic text originating from his village in India.

He made the apology to a group of leaders of various religious groups, including those from the Christian faith, at a closed-door meeting on Friday. He also visited the Maghain Aboth Synagogue at Waterloo Street on Sunday to apologise personally to Rabbi Mordechai Abergel and the Jewish community.

Meanwhile, the police have issued stern warnings to two Muslim Singaporeans connected to the video of the imam who made offensive remarks against Jews and Christians.

One of them had uploaded it on Facebook, the other had supported the imam’s messages.

Both have issued public apologies through the MHA.

Mr Terrence Kenneth John Nunis, 40, as warned for posting the video online instead of reporting it to the police.

The Attorney General’s Chambers has “assessed that his actions were also in breach of the law”, said the MHA in a statement.

The investment associate wrote in his apology: “I accept that what I did was wrong. Instead, I should have only reported the incident to the Police. My action was racially and religiously divisive. I unreservedly apologise to all Singaporeans for my conduct. I deeply regret my actions, and undertake not to repeat my conduct. I also accept that I made the situation worse by making some intemperate remarks.”

Dr Syed Muhammad Khairudin Aljunied was warned for two Facebook posts he made on March 1 and 2.

The posts by the 40-year-old associate professor at the National University of Singapore (NUS) were a fictional conversation between an imam and a “silly convert”.

Dr Khairudin said that fictional account was not meant to support of anyone in particular.

“I also wish to say that my posts could be seen as being supportive of the Imam, and I was wrong to have put them up,” he wrote. “I now wish to apologise unreservedly to Singaporeans and NUS, since my posts were supportive of what the Imam had said. I undertake not to repeat my conduct.”

The NUS, which suspended Dr Khairudin when the police were investigation, said on Monday night that it has also warned Dr Khairudin for breaching the university’s code of conduct for staff and the suspension will be lifted.