SINGAPORE - Growing up with Catholics next door, and Hindus across the road, Imam Syed Hassan Mohamed Al-Attas has been interacting with those of different faiths his entire life.

In fact, a close friend and neighbour in Hillside Drive in Upper Serangoon, where the 67-year-old has lived since birth, is Reverend Adrian Anthony, the former rector of Cathedral of the Good Shepherd.

"Father Anthony's mother was like my mother. When I was young, if I were injured or something had happened, she would run from the house and come to me," he recalled.

Affectionately known as Habib Hassan, the imam received the Berita Harian Anugerah Jauhari 2019, or Achiever of the Year award, from Deputy Prime Minister Heng Swee Keat on Friday (Oct 11) for his contributions to interfaith work.

The head of Masjid Ba'alwie for more than four decades has kept its doors open to those of other faiths.

He inherited this welcoming legacy from his late father, Habib Syed Muhammad Syed Salim Al-Attas, who started the mosque in Lewis Road in Bukit Timah in 1952.

Before the award presentation ceremony, Habib Hassan shared what it was like during his childhood years to make an important point: that respect and strong ties between faiths start first with understanding and knowledge.

"We grew up together, and this was the 'training' we had in the past," he said, noting how living and mixing with those of other faiths enabled him to become more sensitive.

The imam, one of the longest-serving in Singapore, acknowledged that this sort of natural mixing is more difficult today. 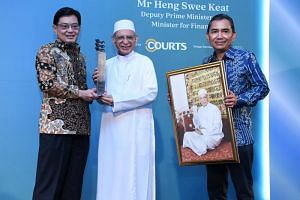 "Unfortunately now, it is different. Due to workload, too much schoolwork, people don't mix around as much any more."

His life's work has been to create spaces and encourage opportunities for mutual understanding.

In 1979, he was the first Singaporean imam to give the Eid sermon in English here.

In 2015, he received both the Inter-Religious Organisation award and the Meritorious Service Medal in recognition of his interfaith efforts.

He was also named by the Royal Islamic Strategic Studies Centre in Jordan as one of the world's most influential Muslims of 2017.

Last month, insensitive remarks made on social media by a local influencer about two Sikh men went viral. In response, the Young Sikh Association invited the influencer to visit the Central Sikh Temple in Towner Road and learn more about Sikhism.

Commenting on the incident, Habib Hassan noted that many conflicts arise out of a lack of understanding, a problem that applies to disputes between faiths as well.

"The purpose of all faiths - Buddhism, Taoism, Christianity, Hinduism - is the same. To teach people to be good," he said.

On the award, the imam said he was surprised to have received it.

"There are many out there who have done a lot more, and done better, who work hard behind the scenes but do not wish to be mentioned," he said.

He likened them to the pillars of a house. While the beauty of the house can be perceived, the pillars that actually keep it standing are often hidden or not obvious.

Despite the many accolades recognising his work in building trust between the religious communities here, the imam was modest about his achievements.

"I am just a drop of water in the ocean," he said.

"We always hope for the best for our country, to get younger generations to be much better than the older generation, more united, with all races and religions working as one."

"I have confidence they will be better, inshallah (God willing)."

The Malay-language newspaper's annual award is presented annually to outstanding Malay/Muslim individuals for their achievements in various fields.

There is also a similar award for those aged 30 and under. This year, it was won by 19-year-old Muhammad Dhafer Muhammad Faishal, a first-year student at Stanford University in the United States.