SINGAPORE - The Immigration and Checkpoints Authority (ICA) warned the public on Thursday (Aug 8) of a scam involving a letter that purports to be from the authority.

A member of the public received an e-mail that claimed that a package in his name had been detained at a warehouse, ICA said.

He was instructed to pay $1,500 to have it released before it could be delivered to him.

The e-mail was accompanied by a letter that bears the ICA logo.

"This is to inform you that your item and cash worth US$27,540 (S$38,065) was seized by the immigration and Customs officers on Aug 2 and moved to a bonded warehouse," the letter said.

The Straits Times understands that the man reported the letter to the ICA as he wanted to verify if it was from the authority.

ICA said in its advisory that the letter was not sent by its officers. 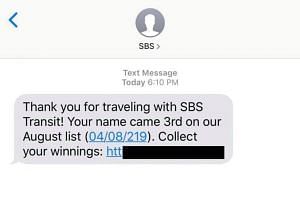 It advised members of the public not to provide personal information such as their name, identification number, passport, contact, bank account or credit card details to suspicious or unknown parties.

"ICA takes a serious view of such scams as it undermines public trust in ICA," the authority said.

Those who wish to provide information related to such scams can do so on 1800-255-0000 or at www.police.gov.sg/iwitness