System on three months' trial, will save 48m paper cards a year when fully in use

The Immigration and Checkpoints Authority (ICA) will be launching an electronic arrival card that will eventually replace the paper-based disembarkation/embarkation card that foreign visitors are currently required to submit on arrival, said the authority in a statement yesterday.

To ensure the smooth implementation of the new electronic arrival card, a trial will be conducted by the ICA for foreign visitors for three months from today.

The trial will be conducted at most of the air, land and sea checkpoints, such as the Woodlands and Tuas checkpoints, Changi Airport and the four cruise and ferry terminals.

During the trial period, foreign visitors who arrive at these checkpoints but have not completed the paper-based disembarkation/embarkation card may be approached by ICA officers to participate in the trial and provide feedback.

The trial will not affect Singaporeans, permanent residents (PRs) and long-term pass holders (such as students and workers) returning to Singapore, as they do not need to submit any disembarkation/embarkation card.

More details about the implementation of the system will be announced at a later date, after the trial is completed.

When the electronic arrival card is fully implemented, travellers can submit their personal information and trip details through the ICA website or via a mobile application before arriving in Singapore. 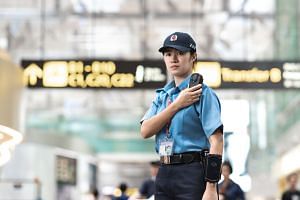 The travellers will then need to produce only their passports for immigration clearance upon arrival.

Currently, the card contains information such as details of the traveller's flight to Singapore, his intended length of stay and where he will be staying. These details will still be required under the new electronic card.

The electronic arrival card will be available in various languages, and those travelling in families or small groups can choose to make a one-time group submission.

Some information such as last port of embarkation as well as address in Singapore will be automatically replicated for all in the group.

The mobile app will also save information from previous trips for use during the next trip to Singapore.

The authority expects to save up to 48 million paper-based cards a year with the digital move.

Mr Duong Dat, a 23-year-old software engineer from Vietnam who visits Singapore once or twice a year to meet friends, said introducing an electronic arrival card would be a great move, as it would reduce the waiting time after arrival.

He said the convenience afforded by the electronic card would also mean there would not be a last-minute scramble for him to fill in the required information.

Bruneian Hana Latiff, 24, who has visited Singapore twice this year for youth programmes, is happy that paper use will be reduced.

But Ms Hana, an administrative employee, added: "I might be concerned (about the information going online), as I am not sure how secure my data will be."

The move is part of a series of recent high-tech measures by ICA.

Earlier this year, X-ray imaging scanners were introduced at Tuas Checkpoint to better detect components on buses and vans which have been modified or which contain explosives.

A new Web portal was also launched by the authority in June to make renewing and applying for a new Singapore passport easier.

In August, eye-scan trials were rolled out for Singaporeans and PRs at Woodlands and Tuas checkpoints, and Tanah Merah Ferry Terminal.