SINGAPORE - The Immigration & Checkpoints Authority (ICA) is set to roll out the new BioScreen system, which captures the thumbprints of visitors arriving and departing at Singapore's checkpoints, as part of its ongoing efforts to enhance security levels.

Starting from Wednesday (April 20), the system will be introduced progressively at the passenger halls of sea and land checkpoints.

Air checkpoints will soon follow as a lead-up to full implementation of BioScreen in the months ahead, ICA said.

ICA added that the system, which underwent a successful trial at Tanah Merah Ferry Terminal last year, will enable it to strengthen its verification of travellers' identities.

Those aged six and above who use the manned counters at immigration checkpoints will need to scan both their thumbprints upon arrival and departure.

The initial phase at the Woodlands and Tuas land checkpoints will see the system implemented at the manned counters within passenger halls. BioScreen clearance for motorists will be implemented at a later date. 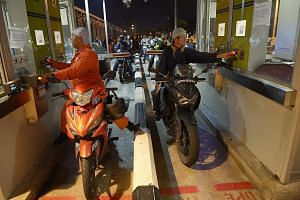 Fingerprint scans for all visitors to beef up security

Singapore citizens and residents who use the enhanced Immigration Automated Clearance System (eIACS) or automated clearance lanes for departure and arrival will not be affected by the implementation of BioScreen.

Only those who use the manned counters at checkpoints are required to provide their thumbprints via the system.

It is compulsory for foreign visitors to scan their thumbprints each time they arrive and depart Singapore.

ICA noted that travellers might experience slightly longer immigration clearance times at the checkpoints due to BioScreen's implementation.

It pledged to monitor the system closely, and will fine-tune and adjust the implementation plans where necessary.