The authorities found more than 800 ornamental birds hidden in a Malaysia-registered bus at the Woodlands Checkpoint on Saturday, the largest haul in five years.

The bus was stopped for a security check when it arrived at the checkpoint at 7am.

Officers from the Immigration and Checkpoints Authority (ICA) noticed that the rear tyres of the bus had been modified and heard chirping sounds coming from within the bus, ICA and the National Parks Board (NParks) said in a statement yesterday.

When they checked the modified compartments above the rear tyres, they found 15 containers with 815 birds hidden inside.

As the 35-year-old Malaysian driver did not possess a valid health certificate and import permits, he was referred to NParks for investigation.

The 815 birds were of five species: 38 white-rumped shamas, 10 oriental magpie-robins, 141 oriental white-eyes, as well as 626 scaly-breasted munias and white-headed munias.

About 600 of the birds survived. They are being cared for and are under quarantine at NParks' facilities. 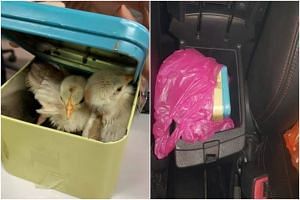 "Animals that are smuggled into Singapore are of unknown health status and may introduce exotic diseases, such as bird flu, into the country. The well-being of the animals will also be affected by poor conditions during the transportation process," said ICA and NParks in the statement.

"The illegal wildlife trade impacts the biodiversity and ecosystems of both source countries and the countries where the wildlife ends up in.

"For example, the white-rumped shama, a popular songbird in South-east Asia, is becoming increasingly rare throughout the region because of its popularity in the pet trade," the statement added.

Importing an animal without a permit carries a fine of up to $10,000, a jail term of up to one year, or both.

Anyone who is found guilty of causing unnecessary pain or suffering to any animal can be fined up to $15,000, jailed up to 18 months, or both.

In April last year, a man driving a Malaysian-registered tour bus that carried 121 live birds concealed in a compartment was sentenced to eight months' jail.

ICA and NParks advised travellers against bringing live animals, birds and insects into Singapore without a proper permit.

Members of the public can go to NParks' website or download the mobile app SG TravelKaki for more information on bringing back animals from overseas travels.