SINGAPORE - The golden glimmer of Olympic champion Joseph Schooling was enough to drive away the Monday blues as scores of Singaporeans gathered at Changi Airport to welcome the swimmer home before dawn.

Colin Schooling speaks to the media at Changi Airport

Colin Schooling, Joseph's 68-year-old father, arrived almost an hour earlier to wild cheers from fans. Colin could not travel to Rio de Janeiro due to health concerns and was in tears when he watched the historic moment on TV.

"Joseph's motto is dare to dream and I think he's done a good job... Now we have to aim for the world record," Colin said.

Father and son, reunited after months apart, were locked in a long embrace as the crowd, many of who stood on seats to catch a glimpse of their idol, screamed "You are the best" and "Joseph, Joseph".

Addressing the crowd, Schooling said: "It's good to be back. Thank you all for being here."

Joseph Schooling signing autographs and posing for photos with fans

Schooling's mother May, 61, said:  "I didn't believe so many people would come at 5.30am in the morning. We're very happy.

"The whole of Brazil knows him. Everywhere we went people were congratulating him."

Retiree Chua Wee Meng, 70, had been at the airport since 10pm on Sunday.
"Schooling is handsome and I hope to get a photo with him. It's the best chance I've got," he said.

Student Phelan Wong, 25, was at the airport with his former classmate Aziz Azhar. Aziz, 25, believed that Schooling's win shows that Singapore can produce sporting talents, although they must be cultivated properly.

“Schooling has good coaches, teachers and parents who are 100 per cent supportive. Being able to go overseas to train helps too,” said Mr Aziz, who works part-time in events logistics and also plays football.

Schooling's victory has united the nation, and even students with classes in a few hours turned up at the airport for a glimpse of the sportsman.

St Andrew’s Junior College students Makarios Tan and Tiah Jhan Rei, as well as Ngee Ann Polytechnic student Rudy Halim, arrived at the airport on the last train on Sunday night. They have classes at 7.40am, but decided to come to the airport to witness a momentous moment in Singapore history.

"I think this will motivate people interested in sports to go one step further. It's a historical, monumental step for Singapore's sports culture," said Tan.

Ms Christina Loo, 50, and daughter Stephanie Neo, 21, left their house in Jurong East at 4.30am to welcome Schooling.

"We wanted to show our support and gratitude to Joseph and his parents for giving us the chance to feel such pride," said Ms Loo, who works part time at a flower shop.

"With all of us here at the airport, he knows we are all behind him."

Both had to return to Jurong East for work later, but insisted they wouldn't be tired as "the adrenaline will keep us going, because we're so happy".

Madam Gin Ho, 43, who was waiting with her sons Tan Zee Heng, 11, and Tan Zee Yan, eight, was armed with a handmade card she made for Schooling.

She said: "He has done so much for Singapore we want him to see a big crowd when he returns."

The Schoolings are scheduled for a stop at Parliament on Monday afternoon. Prime Minister Lee Hsien Loong said in a Facebook post that Parliament would move a motion to congratulate Schooling on his gold medal win, and to express support for Singapore athletes competing in Rio. 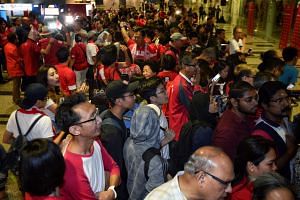