People are the critical factor in preventing the decline of societies, and Singapore is no exception, National Development Minister Lawrence Wong said yesterday.

Societies throughout history have followed a similar pattern of moving from order to disorder, he noted in a speech at his ministry's National Day observance ceremony at Gardens by the Bay.

There are many complex reasons for societies failing, including spending beyond their means, he said, adding that Singapore is not immune to such forces.

He then called on the people at his ministry to play their part in keeping the country going.

"The ability to defy these forces of disorder - it really comes down to the human factor," he said.

"The critical factor that determines a society's ability to keep moving forward is all of us." 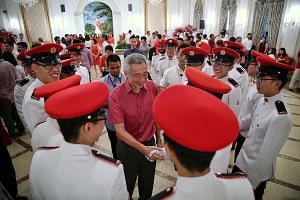 At a separate ceremony, Defence Minister Ng Eng Hen led about 2,200 Ministry of Defence and Singapore Armed Forces personnel in reciting the National Pledge and singing the National Anthem.

Also present were Senior Minister of State for Defence Maliki Osman, the chiefs of the navy, army and air force, and other senior defence officials.

A ceremony for public servants from across the civil service was also held yesterday at the Treasury. It was attended by Deputy Prime Minister Heng Swee Keat, Senior Minister Teo Chee Hean, Minister for Trade and Industry Chan Chun Sing and Minister in the Prime Minister's Office Indranee Rajah.

PM Lee joined around 3,000 residents at a Sengkang South community celebration near Block 686 Hougang Street 61, which featured a display of the nation's flag created from 18,000 eggs and a three-minute fireworks display.

Dr Maliki also attended a separate event with Siglap residents in the evening at Changi Beach, which included a countdown event past midnight to welcome National Day.