In a popular coffee shop in Bedok North, a stall is selling more than your usual kopi. It is also selling two products, called Kopi Jantan Ali Macca and Kopi Panggung Al-Ambiak, made with a herb purportedly from the jungles in Malaysia that is touted as being able to improve sexual ability.

The Health Sciences Authority (HSA) yesterday said they are among three products that pose serious health risks and that the public should stop buying or taking them.

The agency said it acted on public feedback and found the "natural herbs coffee" being sold at Shaik Abdul Kader Al-Jailani Makan Place, a coffee shop in Bedok North Street 3.

The two products were tested and found to contain high levels of potent medicinal ingredients used to treat erectile dysfunction. One potential side effect is life-threatening low blood pressure.

When The Straits Times visited the coffee shop, stallholders denied having any knowledge of such items being sold there. But several patrons at the coffee shop told ST it was an open secret that such items were available at the outlet.

A man in his 40s, who is a regular customer at the coffee shop and gave his name as Edwin, said the stall was regularly patronised by men in their 60s to 70s looking for a "quick fix", adding that he would "not be surprised" if other coffee shops also sold similar brands of "medicinal coffee".

Mr Lee, a 66-year-old retiree who lives in the area, said the coffee shop was "well known" among his circle of friends for being able to provide "good products to enhance their sex lives".

Mr Lee, who declined to give his full name, also confessed to having drunk several sachets of coffee before patronising sex workers. One box, he said, sold for $50, but the price differed from time to time.

"Some of my friends have patronised this place for a long time. But I didn't really see much of a change, so I don't know whether it worked or not," he said.

When tested by HSA, it was found to contain up to 10 times the recommended daily dose of tadalafil, a substance which when taken excessively could result in dangerous side effects. 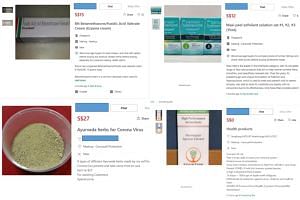 ST spoke to an online seller of the candy, who said it was a "common" item used by men too embarrassed to visit doctors for prescription drugs for their sexual performance problems such as erectile dysfunction.

"My customers have never reported any problems after taking the candy," claimed the seller.

"However, I also always advise customers that if you have any heart or lung problems to not take it."

HSA said that although the candy was labelled to contain fruit juice powders, the websites marketing it included cautionary advice that the product is not recommended for consumers with medical conditions, such as low blood pressure and heart issues, and those taking medications such as nitrates.

"This is usually a tell-tale sign that the product may contain potent medicinal ingredients," HSA said.

Consumers who have taken the products should consult a doctor if they feel unwell.

HSA directed the coffee shop and websites to stop selling the products, and the Bedok stall is under investigation. It warned that if found guilty of selling products that contain potent medicinal ingredients, convicted parties can be jailed for up to two years, fined up to $10,000, or both.