Country is exposed to hazardous impacts such as rising sea levels, higher temperatures

Prolonged heatwaves in North America and in Europe; massive wildfires in California and in Athens, Greece; debilitating droughts seen over New South Wales in Australia; and the extreme rainfall causing massive floods in Kerala, India. This summer has seen a spate of destructive extreme weather worldwide and has led some to wonder if climate change is a factor for these events happening.

As recently as five years ago, attributing a link between climate change and extreme weather was a difficult task. However, this method is now significantly more robust. Several extreme weather types can be attributed directly to climate change arising from human activities, through carbon dioxide and other greenhouse gas (GHG) emissions.

For instance, the Northern European heatwave this summer was two times more likely to occur with present-day climate, compared with a scenario in which humans did not alter the global climate.

When considering costly damages arising from extreme weather elsewhere, one common view is that Singapore is "lucky" to not experience these impacts directly. While we should acknowledge our fortunate geography (for example, our equatorial location means typhoons are very unlikely to happen here), we still are exposed to several hazardous climate impacts.

As global GHG emissions continue to rise despite political pledges from the 2015 Paris Agreement, it would be timely to reconsider how vulnerable Singapore is to present and future climate change impacts. There are three of note.

In the short term, we will feel the heat of climate change from increases in average temperatures. Thirteen out of the past 15 years have been the warmest in Singapore's historical record since 1929.

Water use in Singapore is still high relative to other cities, and several of my colleagues from the National University of Singapore point out that individual and commercial water demand can be lowered to reduce drought vulnerability.

Depending on future global GHG emission levels, climate modelling by the Meteorological Service Singapore projects further average temperature increases of between 1.4 deg C and 4.6 deg C, as well as more frequent warmer days and nights by 2100.

These temperature changes are due to larger-scale GHG emissions and the local "heat island" effect directly resulting from Singapore's urbanisation. Replacing Singapore's natural forests and mangroves with buildings and other infrastructure results in built-up surfaces retaining or producing considerable amounts of heat. At night, the difference between downtown Singapore and forests in Lim Chu Kang can exceed 7 deg C. 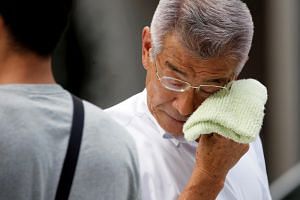 Climate change: Many think they can't make a difference

Warmer temperatures have several direct impacts, such as outdoor thermal discomfort and increased likelihood of heat stress injuries, and indirect impacts from increased use of air-conditioning that are largely powered by non-renewable energy sources in Singapore, thus increasing local GHG emissions.

How can we reduce our vulnerability to heat? We cannot depend on natural variations in climate, such as the odd cold spell that happened in January, to regularly solve this problem.

To this end, the Cooling Singapore initiative has an illustrative guide of heat island adaptation methods, such as maximising shade, enhancing natural wind flow and increasing urban green spaces.

Unlike the temperature, Singapore's average total annual rainfall of about 2.4m has not changed substantially in the long-term record since 1869.

In future, climate change is not expected to alter total annual rainfall for Singapore. However, in the medium term of the next 30 years, changes to rainfall patterns, both in the excess and lack thereof, will be an issue.

First, intensities and frequencies of local rainfall events have significantly increased over the past 30 years. Second, periods of meteorological drought, in which monthly rainfall is consistently below average, have recently been more intense for Singapore and Johor.

Periodic local flash floods aside, national water agency PUB has been immensely successful in reducing Singapore's vulnerability to rainfall extremes, especially given extreme flooding occurring elsewhere recently. Enforced water rationing from drought has not occurred in Singapore for more than 50 years, thanks to effective PUB policies.

Singapore, however, still imports about half of its daily water supply from Johor. A prolonged El Nino episode, potentially strengthened by climate change, could lead to a repeat of low water levels in the critical Linggiu Reservoir, such as in 2016.

While the Republic can adapt to drought by ramping up Newater and desalination production, these technological approaches are economically and environmentally costly. Water produced by these methods is considerably more expensive than imported water, and also energy intensive.

While there is justified confidence that technological advancements in desalination and Newater will lead to cost decreases, a more prudent and immediate drought adaptation approach is to reduce water use through changing consumption behaviour.

Water use in Singapore is still high relative to other cities, and several of my colleagues from the National University of Singapore point out that individual and commercial water demand can be lowered to reduce drought vulnerability.

This demand-side approach can be effected through consumer awareness of these water costs or with reasonable and judicious increases in water tariffs.

An additional, and unwelcomed, El Nino-related regional climate impact is that it enhances conditions in which South-east Asia wildfires can occur and rapidly spread.

The local devastation from fires within Sumatra and Borneo in 2015 was catastrophic. Given the right wind direction, smoke particulates from wildfires in Borneo and Sumatra can reach Singapore as transboundary haze.

While commendable cross-border preventive action within Asean has arguably lowered wildfire and haze risks since 2015, such efforts have occurred in the absence of El Nino conditions.

The effectiveness of these adaptation measures will be tested when El Nino events occur again.

The last and most severe climate impact Singapore faces in the next 50 years and beyond is sea level rise. This is caused by thermal expansion of sea water volume and from melting land ice.

The average sea level around Singapore's coasts has risen steadily at a rate of between 1.2mm and 1.7mm per year, and is projected to increase to about 1m by 2100.

Even though the magnitude of these increases may appear to be minute, sea level rise is the most severe climate impact for two reasons.

First, future projections have considerable uncertainties about the melt rates of land ice in regions such as Greenland. We are certain that if the massive Greenland ice sheets completely melt, global sea level would rise about 7m.

What we are uncertain about is the rate of glacial melt. Current measurements in Greenland strongly suggest that melt rates are vastly underestimated, and ongoing research there suggests that accelerated sea level rise, perhaps more than 1m by 2100, could happen. Indeed, the rate of global sea level rise since 2012 has jumped to 4.5mm per year.

Second, while Singapore has pre-emptively effected coastal policies for adapting to rising sea levels such as by raising minimum land reclamation height from 3m to 4m above mean sea level, neighbouring areas that Singapore depends on for its survival are significantly more vulnerable to rising waters.

Low-lying rice fields in Thailand and Indonesia are important regions for Singapore's food supply, and the capacity to adapt to sea level rise in these countries is either inefficient or lacking.

Furthermore, numerous people living in neighbouring coastal settlements could be permanently displaced by rising waters. The socio-political effect and consequences of these climate refugees in this region are as yet unknown.

Clearly, Singapore's present climate change adaptation has been successful in staving off the worst impacts we have seen elsewhere. Yet, it is increasingly clear that adaptation by itself has a limit in reducing Singapore's vulnerability to climate change, especially with sea level rise.

So what can be done?

Mitigation of GHG emissions is sorely needed, in keeping with the Paris pledges, in Singapore and elsewhere.

While this current year of climate action has led to undoubted and important increases in local awareness, it has also seen the belated announcement of a Singapore carbon tax of $5 per tonne of GHG emissions, to be implemented next year. This tariff will eventually triple by 2030, and is aimed at encouraging more efficient use of non-renewable energy.

Time will tell if the efficacy of Singapore's mitigation efforts will work, and more can and should be done given the urgency of climate change and its impacts. But it is undoubtedly a solid start towards reducing local carbon intensity and total emissions per Paris.

•Dr Winston Chow is an assistant professor at the Department of Geography, National University of Singapore. He is also affiliated with the Institute of Water Policy, Lee Kuan Yew School of Public Policy at NUS. His research examines how cities affect weather and climate, and how weather and climate affect cities. He is a principal investigator in the coolingsingapore.sg initiative, and will be a lead author in the chapter on Cities, Settlements And Key Infrastructure for the forthcoming Sixth Assessment Report of the Intergovernmental Panel on Climate Change. Dr Chow tweets sporadically on science and geography topics unrelated to climate change, and can be reached on Twitter @winstontlchow.

A version of this article appeared in the print edition of The Straits Times on September 06, 2018, with the headline 'How vulnerable is S'pore to climate change?'. Subscribe
Topics:
More
Whatsapp Linkedin FB Messenger Telegram Reddit WeChat Pinterest Print Purchase Article Copy permalink