Scoot announced on July 25 that it will be flying to five new destinations, including Honolulu, its first stop in the United States. The low-cost carrier's first long-haul flight to Europe - Athens - took off from Changi Airport on June 20.

Despite some earlier failures, long-haul budget carriers are making a comeback.

It is all very exciting for price-sensitive travellers, but while sitting in a no-frills plane for two or three hours may not be a big deal for many, a 10-hour flight can be a totally different experience.

Here are some survival tips for long-haul budget flying. 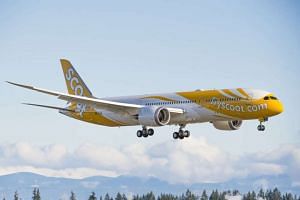 With all-in fares of just under $200 for a London-Singapore ticket which is what Norwegian is offering to launch the new route, it's easy to get excited and quickly confirm the booking. But remember: When flying budget carriers, the fare usually gets you just a seat and nothing more.

That may be fine for a short flight on a short trip, but on long-haul flights which usually also means a longer trip, you would need to carry more things. With limits on how much weight you can carry by hand, you are likely to have to check in at least one bag. You will also need to eat and drink - none of which is offered as part of the fare.

And if you want to sit with family or friends, you also want to book your seats in advance. All these extras come at a cost which is less if the bookings are done in advance. Last-minute bookings at the check-in counter will cost significantly more.

You can of course try to sumggle food and drinks on board, but with the exception of Jetstar, many airlines do not allow this. While some cabin crew may let you off, there is a risk of embarrassment if caught and told off.

If you still refuse to pay for food and drinks, eat a big meal before taking off. A pack of mints can also help to mitigate thirst or the discomfort of a dry mouth during a long flight.

The longer you are in a plane, the chillier it gets. Unlike full-service airlines that provide blankets, budget carriers do not. So it is important to prepare for the cold, for example, with your own blanket, sweater and socks.

Cabin air is dry so it is a good idea to also bring a lip balm and moisturiser. The airline is not going to give you an amenity kit.

To be comfortable, it is also a good idea to bring a back pillow. This provides relief for the lower back and is probably more valuable than a neck pillow.

Boredom is the worst thing that can happen to anyone on a long flight, unless you are one of those really lucky people who can sleep on such flights without having to twist and turn every few minutes or drift in and out of sleep which can be worse than just staying awake.

So unless you plan to engage in conversations with the cabin crew or other fellow travellers, come prepared to entertain yourself.

If you love to read, bring a good book, magazine or other reading materials. A crossword puzzle or two is not a bad idea either. Or maybe some board or card games if you're travelling with family or friends. Be mindful though that others around you may not be too thrilled if the game gets too exciting.

Before bringing laptops and other electronic devices, check that they are all fully charged. Make sure you download whatever you need to, before the flight.

Also check if the airline offers Wi-Fi on board, for how much and decide if it is a price worth paying.

Delays can happen anytime, anywhere. When flying budget carriers - whether short or long haul - remember that if there are delays for whatever reasons, the airlines are not obliged to feed you or put you up in hotels. It says so in the contract when you book your ticket - not that many people bother to read it.

So while many travellers demand the services as their right, the truth is that when budget carriers go the extra mile, they are really just being nice and doing it out of goodwill.

If you are flying budget because you are on a budget, it is a good idea to carry some snacks with you - not for eating during the flight but to curb hunger pangs while on the ground, should there be any problem.