The Workers' Party-run Aljunied-Hougang Town Council (AHTC) expects to spend $17.5 million to replace selected lifts over the next five years, ahead of those lifts' usual 28-year lifespan.

The AHTC, which manages more than 1,700 lifts, also gave details of how it plans to implement the Housing Board's Lift Enhancement Programme (LEP), which helps town councils fund the installation of recommended lift features.

In a statement, AHTC chairman Pritam Singh noted that lift maintenance and part replacement costs have been rising.

The town council's lift department continues to review the scope of maintenance works needed for each age group of lifts, he added.

Under HDB guidelines, lifts are scheduled for major upgrading or replacement after 28 years. 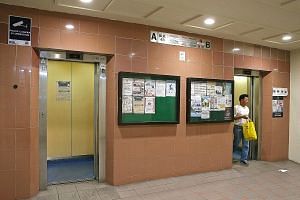 The AHTC plans to "progressively schedule lifts nearing the 15-year mark of their lifespan" for the LEP, roughly corresponding to the halfway point of the recommended lifespan. But the AHTC also noted that some older lifts had critical parts which became obsolete earlier than the 28-year guideline, "contributing to frequent breakdowns".

It will thus replace selected lifts ahead of the 28-year guideline.

On Oct 6, it issued a tender for the installation of 20 new lifts in Aljunied GRC. Over the next four years, it will call similar tenders to replace selected lifts.

"Over a five-year period, the overall cost of this lift replacement exercise, funded chiefly through the town council's sinking fund, is estimated to cost, at current prices, approximately $17.5 million," said Mr Singh.