"Land is a critical factor in any country's development, more so for a little red dot like Singapore," he wrote. "But through human ingenuity, we can come up with innovative ways to stretch our land options... That's how we can overcome our natural constraints, and continue to succeed over the long term."

The first, upwards, goes beyond high-rise living. Mr Wong raised other applications such as solar panels on Housing Board block rooftops and vertical farms.

Using the new Tengah town as an example, the minister said chillers for centralised cooling systems are being placed on rooftops for better energy efficiency.

"The vertical strategy is also about optimising existing spaces, especially where we have yet to maximise the full development potential," he added, pointing to Paya Lebar Air Base. Relocating the airbase will allow for new and higher developments in the surrounding area.

The second strategy - downwards, or underground - is already being used, with underground utility systems like the power grid, telecoms lines and Marina Bay's district cooling system. But more is being done, Mr Wong said. 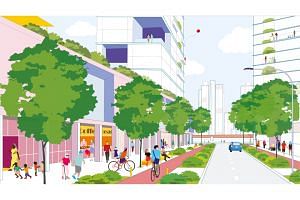 Land prices for public housing lower than that for private

Building boldly: 5 things you might not know about infrastructure planning in Singapore

The first underground 230kV substation will soon be built in Pasir Panjang and more underground district cooling systems will be added in new areas like Punggol.

Singapore is also going deeper underground, beyond 150m below ground, said Mr Wong, noting that there are already rock caverns in Jurong for oil storage.

"We are now identifying and safeguarding suitable locations for future cavern uses."

He also said the Government is putting together a comprehensive three-dimensional underground space plan, with Marina Bay, Jurong Innovation District and Punggol Digital District already included and more areas to be added.

The last strategy highlighted by the minister was extending seawards through reclamation.

For example, Singapore has reclaimed land in Tuas for a new terminal, and is moving its existing ports in the south there.

This will free up about 1,000ha of prime waterfront space, he wrote, allowing the downtown area to extend beyond Marina Bay. Mr Wong also highlighted a new method to reduce sand used in reclamation by 40 per cent - by using polders and dikes in Pulau Tekong.

"Reclamation is important for another reason - it is a strategy to protect Singapore against the threat of rising sea levels due to climate change," he wrote, noting that reclamation levels have been raised by 1m.

"We are studying the need for other infrastructures, including sea walls and pumping stations to protect against rising sea levels. These are long-term investments but we are planning well ahead so that we can put them in place in a timely manner," he said.

A version of this article appeared in the print edition of The Straits Times on June 27, 2019, with the headline 'Up, down, in the sea: Ways to get more out of land'. Subscribe
Topics:
More
Whatsapp Linkedin FB Messenger Telegram Reddit WeChat Pinterest Print Purchase Article Copy permalink