SINGAPORE - In his final year of university, Mr Chua Kah Sheng was attending school for only half a day each week.

The other 4½ days were spent at the Defence Science and Technology Agency (DSTA), where he was doing a year-long internship in data analytics.

He was one of 14 graduands this year from the Singapore Institute of Technology (SIT) who were part of the SkillsFuture Work-Study Degree Programme.

They made up the pioneering batch from the university to graduate under the programme, which was launched in 2017 at SIT and SIM University, now known as the Singapore University of Social Sciences.

Mr Chua, 26, who received a bachelor's degree with honours in information and communications technology (software engineering), was speaking to The Straits Times after his graduation ceremony on Wednesday (Oct 16) held at The Theatre at Mediacorp at one-north.

A total of 1,868 graduates - SIT's largest cohort thus far - will receive their degree certificates from Wednesday to Friday.

Under the work-study programme, which draws inspiration from the German and Swiss system of apprenticeship, students keen on careers in growth sectors, such as information security and hospitality business, can go to work in companies and receive full or partial sponsorship to study for a degree in either university.

Mr Chua, who received a partial sponsorship from DSTA for his 3½-year course, now works as a data analytics engineer there, a role which involves coding and programming. 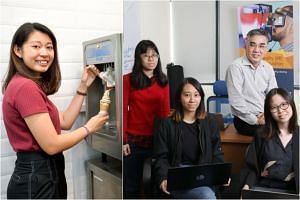 Why school's 'in' at work: More embracing programme combining job and study

Juggling work and school was initially challenging, he said, but he recalled being able to turn to both his supervisors in the agency and his SIT professors for help.

"It was not just an internship. When I had problems in school, I could give a call to my boss at work and she would give me advice. But for research academics, they have expertise in certain topics."

"The experience and skills I picked up during my internship was applicable to my school modules as well. I am able to better think from the user's perspective - like how the solution I've come up with can be of use to them - instead of doing something for the sake of doing it."

"I think the key takeaway from this experience would be the skills I've learnt - technical and soft."