Buyers can use more from CPF, get bigger HDB loans if lease covers them till age 95

As society ages, there is a risk that some people could outlive their home leases. Rules have now been updated to strike a balance between giving property buyers more flexibility, while ensuring their leases are long enough and their retirement funds sufficient.

Buyers can now use more from their Central Provident Fund (CPF) and get bigger Housing Board loans for ageing flats, so long as the property's remaining lease covers the youngest buyer till the age of 95.

The changes, announced yesterday by the ministries of Manpower and National Development, mark a shift in how the Government regulates CPF usage and disburses public housing loans. Instead of looking only at a flat's remaining lease, the focus is on whether a property can last its home owner for life.

But restrictions will still be in place to ensure buyers have sufficient funds for retirement: HDB flats must have at least 20 years left on their leases - down from 30 years - for CPF monies to be used for the purchase. HDB flats are sold with 99-year leases.

Also, CPF members aged 55 and older must have properties with leases that cover them till age 95, before they can withdraw their CPF savings in excess of the Basic Retirement Sum. This effectively means their property must have a remaining lease of at least 40 years, up from the old requirement of 30 years.

"The updated rules will provide more flexibility for Singaporeans to buy a home for life, and will apply to both public and private properties," Minister for National Development Lawrence Wong said in a Facebook post last night.

The announcement comes on the back of many public discussions about depleting leases of ageing HDB flats. Apart from announcing steps like a second round of improvements for ageing flats, Prime Minister Lee Hsien Loong said last August that the Ministry of National Development (MND) is looking to "improve the liquidity of the resale market, making it easier for people to buy and sell old flats". 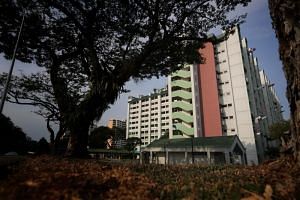 Old is gold for these buyers of ageing HDB flats

OrangeTee & Tie research head Christine Sun said the move would widen the pool of buyers who can use CPF to buy an older flat, and increase demand for such flats.

Some older buyers, who had not been able to use CPF for buying homes, might now be able to do so, she said.

It may also deter younger buyers from purchasing flats whose lease they may outlast.

MND said most buyers will not be affected by the changes, as 98 per cent of HDB households and 99 per cent of private property families have a home that will cover them to age 95. But older buyers can now buy ageing flats and face less restrictions on CPF usage.

For example, a couple who are both 45 years old can pay for a resale flat with 50 years left on its lease using more CPF monies. They can use their CPF to pay up to 100 per cent of the valuation limit - the property price or valuation, whichever is lower - compared with 80 per cent previously. Their housing loan would remain the same.

On the other hand, younger buyers who buy older flats have to be prepared to fork out more cash. For example, a couple both aged 25 who buy a flat with 65 years of lease remaining can use their CPF to pay only 90 per cent of the valuation limit, down from 100 per cent.

They would also be entitled to a smaller loan limit of 81 per cent, compared with 90 per cent.

Home buyers who are not able to tap the maximum CPF usage and HDB housing loans will have the respective amounts pro-rated.