First, it was the unmistakable stench of sewage that plagued one unit in the executive condominium (EC) in Punggol.

One resident, Mr Ang Chee Tiong, who works as a supervisor in the pharmaceutical industry, said that he noticed rust on the staircase leading to his roof terrace after he collected his keys last September.

The EC's defects team repainted the staircase at least thrice but the rust returned, said Mr Ang, 50. He paid more than $1 million for his three-bedroom apartment.

"There was water seepage in two toilets and a walk-in wardrobe area as well and it's worrying," said Mr Ang. "Before I moved in - in January - I noticed cracks in the glass panel of my sliding door in the balcony and the paint on the wall was peeling. "

He informed the developer of the defects and they were rectified. 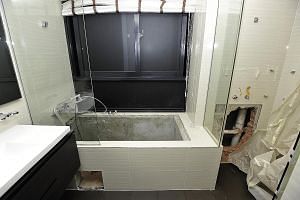 But Mr Ang still spent $40,000 to put up wallpaper and wall panels in his unit, and also replaced the flooring in case of future defects.

He said: "I didn't expect to have to fork out extra money, and it's very disappointing."

Mr Ang, who lives with his wife, 42, and two children, aged 13 and nine, said his master bedroom toilet has also been put out of use for three weeks, due to rectification works as a result of the foul smell coming from the roof terrace.

Yesterday, The Straits Times reported that owners of a fifth-floor unit in the same EC had been suffering the stench of sewage emanating from their toilet for months.

Another resident, Mr Chris Yeo, said: "This unit is less than a year old but there are problems already. (The developer) has touched up my staircase twice but it's no use."

The salesman, 35, who moved in last September and lives alone, paid about $1 million for his three-bedroom penthouse. He said: "The interior and material used for the staircase need to be replaced. I'm worried about how long this can last."

A spokesman for the developer Qingjian Realty said: "Whenever a defect is raised, we will make an effort to go down and meet with the residents and rectify to our best ability. But some defects take longer to resolve."